Isn't technology wonderful?  With the Internet at our fingertips, we can find out anything we ever need to know in milliseconds.  Well, sometimes it works that way.

After shipping off a quilt to a show yesterday, I was reminded that I should let our local fiber art organization know so they can post the info in their "see our work" announcement page.  But I should also tell them the dates of the show. 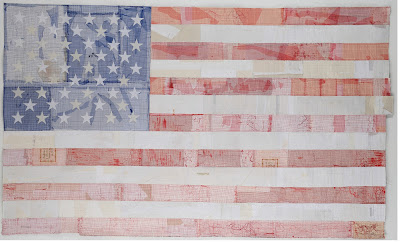 The hard copy acceptance letter from the museum was still in my shirt pocket from taking it to Fedex to read off the address.  But the acceptance letter did not say the dates of the show.  I looked up in my email for the notification message, but that did not say the dates of the show.  I typed "Evansville Museum events" in google and found no home page for the museum.  Instead I got a page from a trip planner website telling me that the museum's nice new facility will be opening January 2014, I should allow four hours and would I like to build an itinerary.  No, I wouldn't.  But there was a link to the museum website, which I clicked on.

Oops.  Got the dreaded exclamation point in the red triangle: "Your connection is not private.  Attackers might be trying to steal your information from www.emuseum.org (for example, passwords, messages, or credit cards.)"  Well, that's scary but I only want to know the dates of the show.  The web is so concerned about my safety that it won't even let me take the risk and see the site anyway -- my only choice is "Back to safety."  North Korean hackers can infiltrate the site of any place I do business with, steal my social security number, plant ransomware on my computer, but at least I'm not at risk at the Evansville Museum!  What a relief.

I googled Evansville Museum again and found a link to their facebook page.  Under the "events" tab it showed several events in October and November, plus one next March and one next August, but not the December 9 opening reception (they did mention that date in the acceptance email).  I scrolled through their posts, reading as far back as August, but no mention of the show.

Back to those emails.  They show the same website that I'm not allowed to go to, for my own safety.  Hmmm.  I googled "Mid-States Craft Exhibition" and aha -- toward the bottom of the page, founds a listing for "Art Museum, Movie Theater, Attractions: Evansville, IN" and it's the museum's own website!  Not the same URL as the one on their stationery, or the link in the emails, but an actual working SAFE website!

But no listing for my show in the revolving banner on the top of the page.  In a sidebar called "upcoming events,"  no show listed, but up in September was an entry called "Mid-States Call for Entries September 21 - February 16."  Clicked on that, and found a brief description, with the eligibility rules and name of the juror, but no show dates, and a link to the full prospectus on CaFE, which finally revealed the dates: December 10 through February 4.  (Well, actually December 9, since that's the opening reception.)

And it only took me 35 minutes to find it out (that's slightly less than one millimonth).

But anyhow, if you find yourself in the vicinity of Evansville over the winter, drop in and see my flag.