The people -- Plan B


When I started making daily people in January, I was intrigued by the way limp fabric could become firm simply through wrapping and tying.  A few friends to whom I showed the project were surprised to find that the people had no armatures, because they had a lot of structural strength -- that was the whole point of my exploration.  But most of the little guys didn't have enough structural strength or balance to stand on their own.

So when I got the opportunity to put them all into an installation, I needed to retrofit some skeletons into practically everybody, extending into a peg that could be fit into a drilled hole on the base. 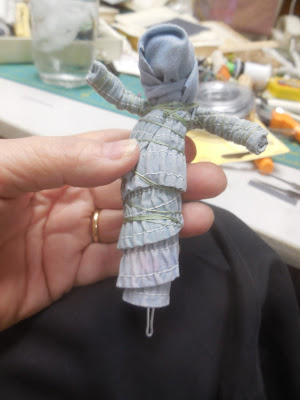 Some of the people were constructed so I could easily run a support wire up under their skirts or thread it up inside their legs.  Others had been wrapped so tightly, and perhaps had some internal folds and creases, that I couldn't force wire through the center of a leg, so I had to snake an external wire up the back of the body, secured by their original wrappings. 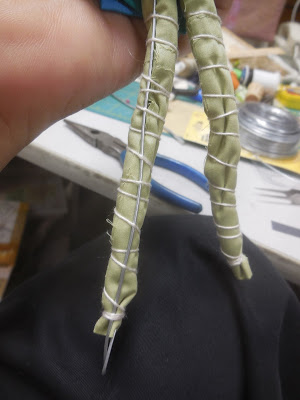 That's how I spent my weekend, with wires and wirecutters.  I could have saved a lot of time by putting the wire inside in the first place, but would that have been any fun?  Heck no!

I'm almost done with the installation -- I'll show it to you soon.