Another kid learns to sew


Isaac, who just turned 5, was visiting last week.  He seemed to be independently absorbed in Curious George and a jelly sandwich, so I went into the studio to do some sewing.  I'm starting to get nervous over two looming deadlines and am seizing upon every opportunity to sew in between the various holiday social events.

I did get some sewing done before he came down to visit, but then he hovered over my shoulder, watching intently as I finished a seam.  "When can I do that?" he wondered.

I thought about it for a bit.  I have previously told him that he has to be 6 before he can use a sharp knife (that seemed sufficiently far away at the time I said so) and I thought maybe 6 would be a good age to start sewing.  But then I thought what the heck and said "you can do that right now."

So we found a box high enough to bring the foot pedal within his reach, and cut a piece of denim from my "old jeans for mending" box.  Grabbed a bag of other people's leftovers from the Crow Barn last fall and had him choose some strips.  Had him arrange a composition on the denim background, set the sewing speed to the lowest end of the scale, and told him to step on the gas. 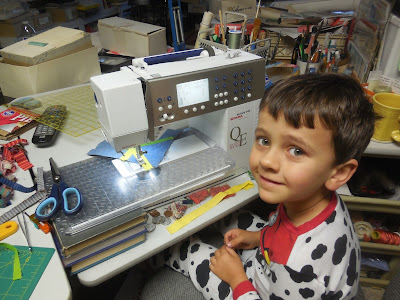 And so he did!  I showed him how to lift the presser foot and pivot the fabric when he got to the end of the line.  He quickly realized that if he forgot to put the presser foot down again the machine would beep at him and not sew (thank you, Bernina).

He chose some striped strips from my working pile on the table and added them to the composition.  Finally we sewed a sleeve on the back and inserted a chopstick as a hanging rod.  This was supposed to be his Christmas present to his mother, but he couldn't wait that long to give it to her and made her open it yesterday. 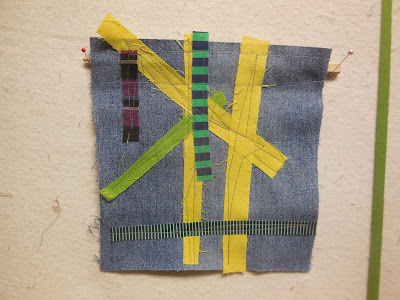 I was really proud of him, and he was proud of himself.  He informed me that sewing is a lot of fun and now he has to make some more.  Fine with me!

I realize that I am getting way more laid-back as a sewing instructor than I was with my own kids and then with Zoe 10 years ago.  Rather than start with choosing an artistically cohesive palette, we just grabbed whatever piece of fabric he laid eyes on.  Rather than teach seams, we did raw-edge applique.  Rather than sew the resulting composition into a pillow or a little quilt, we just put on a sleeve and declared it finished.

Rather than tell him where to sew, I would ask him, when he stopped, "Where are you going to sew next?  What's your plan?"  He would decide, and then we would sew that way.  Some strips got stitched down more than others, but that's fine.  Some strips extended over the edge of the denim base, but that's fine too.

I flash back to my own grandmother teaching me to sew.  She wanted me to learn traditional seamstress skills -- no raw-edge applique in Tawas City, thank you very much.  If I sewed a crooked seam I ripped it out and did it right.  That approach worked fine for me, the classic goody-goody overachieving child, but decades later I don't want to use that approach for my own grandchildren; I want them to figure out their own plans.  And in the 10 years between Zoe and Isaac I have loosened up even more. 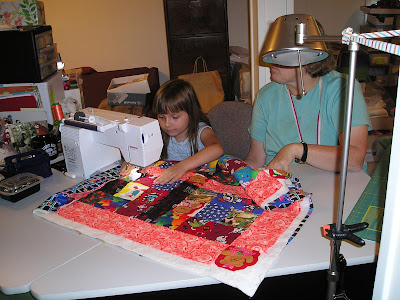 When I taught Zoe how to sew I sat next to her and "helped" her hold the fabric so the seam would be straight.  (That hidden right hand was grabbing the fabric and tugging it straight.)  But with Isaac I pretty much kept my hands to myself, and you know what?  His sewing turned out just fine.
Posted by Kathleen Loomis at 5:30 AM