I wrote last week about the workshop I led on hand stitching onto a finished quilt.  After practicing stitching onto sample sandwiches in the morning, people pulled out their own quilts and decided what to do.

Whenever you teach a workshop the first time, you are surprised at how it turns out.  I had anticipated that people would be productively stitching away within minutes.  But instead, we spent the entire afternoon on evaluation and auditions.

We put the quilts up on a design wall and talked about what they needed next.  Usually the maker already had an idea of what she wanted to do next, but sometimes after we kicked the tires, it turned out she needed to do something else.  Some people knew there was a problem with the quilt but weren't sure what it was, so we talked about design, composition, color palette.

Eventually each quilt got to the color-choice stage, where we draped floss in various colors over the quilts, stood back twenty feet, and contemplated which ones worked (and which ones were even visible!). 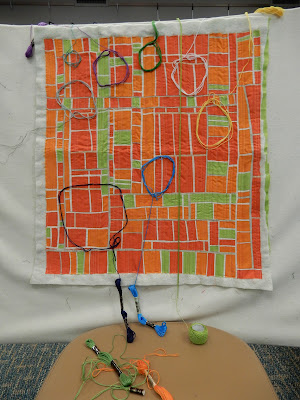 We did the first couple of evaluations with everybody listening, and from then on people could bring their work for "private" consults -- but many of the participants decided they would rather listen in on a lot of consults than do much stitching on their own.  That was good, because many times the comments from the onlookers were more helpful than the comments from the teacher.

So the workshop changed course in midstream.  Instead of a lot of practice in hand stitching, it turned into a lot of practice in evaluation and auditioning.  In the long run, practicing those skills is probably going to be way more valuable than practicing how to make french knots on a thick, densely stitched quilt (hint: use pliers to pull the needle through).