Readers had some great suggestions about how I could free up my calligraphy, such as writing left-handed, holding the pen way up at the tip so it is not well controlled, or wrapping the pen so it would be harder to get a firm grip.  All excellent ideas, which I promise to try soon.

Several comments about the yearbook flap in which the governor of Virginia appeared in blackface in the mid-1980s and is now catching hell.  Leigh posted a thoughtful comment: "Making fun of a group of people as a young adult with no sense, in that time period, was really tasteless and stupid, but not illegal.  While it undoubtedly caused a general harm in encouraging idiotic attitudes, it didn't cause lasting (and illegal) harm to a specific person.  I would however like to see what has changed.  Has he actually done anything to stop institutional racism or is he just status quo?"

I don't live in Virginia and I don't know much about the governor, but I did some research and found that in the year he has been governor, he has vetoed 20 bills, including those that would suppress wider voter participation, enable unfair redistricting, encourage inferior health care and prohibit cities from raising the minimum wage.  As a state senator he voted in favor of reproductive rights and expanding Medicaid coverage.  To me that sounds like he has actually done something good.

Here's my favorite miniature of the week, made from a 1/4 ounce lead weight (heaven knows where that came from...): 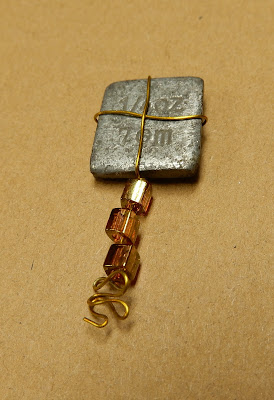 Posted by Kathleen Loomis at 8:52 PM