A couple of days ago I wrote about my struggle to make some art for my co-op gallery's theme show about "home," and how the little stitched house didn't seem to be good enough.  Shannon left a comment that snapped things into focus for me:  "As for your houses, I actually think the little pyramids seem pretty house-y and home-y in a non-cutesy way.... you might consider making more tetrahedra, since they seem to come together better and at least IMO would fit the theme."

Thanks Shannon, I needed to hear that -- you're right.  And I'm better off in terms of art quality sticking with something that succeeded in the past and already has a to-do list for further expansion than stretching the concept too far into the cute-o-sphere.  So here's what I started yesterday, and stitched all afternoon while listening to the opera (obviously not assembled into a pyramid yet): 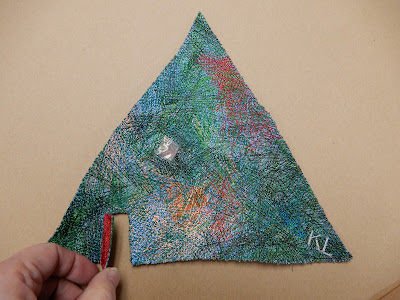 And thanks to Marian in Amsterdam, who said she has not commented much in the past because English is not her native language, but is now doing it more.  Marian, I love hearing from people in faraway places.  I think this proves that art and craft can transcend boundaries (and perhaps can even transcend boundaries within our own countries).  Thank you for reading, and thank you for commenting.

After I wrote about Isaac's fabric collage, Martha asked whether we have ever used a handcrank sewing machine, which many kids find fascinating.  No, we haven't, but I wonder whether a handcrank is going to have much appeal to a boy who is already asking whether the machine can't go faster.  How ya gonna keep em down on the farm after they've put pedal to the metal?

You may have noticed the reappearance of Found Poetry in the blog this week.  I used to do one every week but decided at the end of the year to cut back.  Too much time was being spent on this task, and it was starting to feel like more of a job than a joy.  But I had this poem about the new year almost found, and the concept was getting old as the days ticked past, so I decided to finish it before the end of January.  From now on I'll try to do found poetry at least once a month, but without committing to a specific schedule.

Finally, here's my favorite miniature of the week: 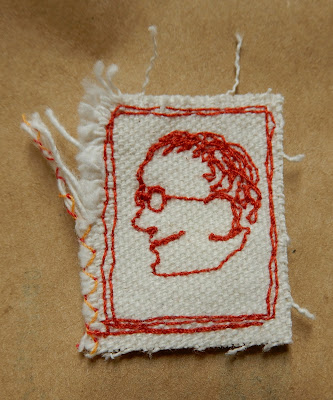 You can check out all my daily miniatures, and my daily calligraphy, here.

Posted by Kathleen Loomis at 10:34 PM