As "education chair" of my local fiber and textile art group, I get to organize workshops and as a side benefit, show up to give out nametags, collect money and say hello.  Sometimes I hang around for a while to see what's going on.  Earlier this week I dropped in at a book-making workshop led by Debbie Shannon.

She wasn't sure exactly what people wanted to get from the workshop.  With a room full of intermediate-to-advanced artists, she knew that having everybody do the same project wasn't going to go over well; some people would want to finish one book, while others would want to make samples of two or three different kinds to have as references for future work.  Some might want to know where you buy this or that or how you work with a particular kind of paper; others might think it a waste of time to talk about that.

So Debbie did an approach that I'd never seen before -- but plan to steal and use in the future.

She gave each person a half dozen tiny post-it notes and told them to put their names or initials on each one.  Then she had a sheet on the wall with a half dozen possible subjects for discussion.  Each person was asked to put a post-it note above any subject she wanted to cover in the workshop. 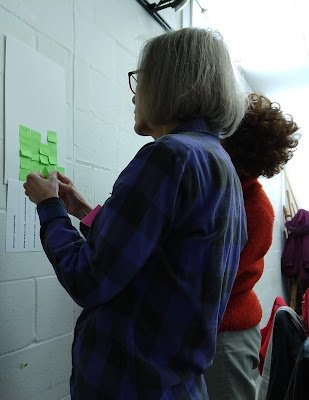 The finished grid showed what the group wanted to do, and what they didn't particularly care about.  this way Debbie could make sure to cover the important subjects -- learning to make three different book structures -- and leave those less interesting to the end, or not at all.  So much more efficient than asking for show of hands, or proceeding with a set lesson plan only to learn that many of the people in the class were bored or frustrated. 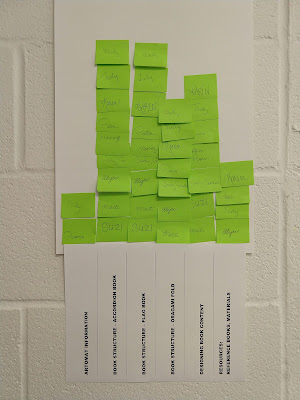 Posted by Kathleen Loomis at 4:08 AM