After I posted about making heavily machine-stitched pyramids that would fit a "home" theme, Sylvia suggested that I might make a yurt.  That was an exciting idea until I realized that stitching the pyramidal roof to the cylindrical walls would require 1. careful measurement and 2. a bunch of hand stitching.  Decided to put that idea on hold until I have run with the pyramids as long as I can.  But thanks for the idea, Sylvia, it will stay on my radar screen.

After I posted that I'm having trouble making my daily calligraphy look more like drawing, Olga  suggested that I try asemic writing, in which what you see on paper resembles writing but actually has no words or readable characters.  I had done some asemic writing many years ago when I was in a bleach discharge phase of quiltmaking, "writing" with a squeeze bottle of bleach-containing dishwasher gel onto the wonderful old Walmart black fabric that discharged to gray and white.

So yesterday and today I did asemic script as my daily calligraphies.  They greatly resemble my normal calligraphic handwriting, even though I took pains to make "letters" that don't exist in the Roman alphabet.

Neither of these examples accomplish anything to make my calligraphy look more like drawing, but they are a step in a new direction.  Inventing new characters and letterforms is certainly an approach that has many possibilities, and maybe I will pursue that for a while.  Thanks, Olga!!

Meanwhile, Rachel suggested that I start with a text in an unfamiliar language or an unfamiliar alphabet and write it in mirror image or upside-down to focus on the shapes instead of the meaning.  I think that's a great idea and after I explore Olga's idea for a while I promise to come back to this one.

Having been a professional word person throughout my career, it's hard for me to not think about the text and its meaning, but maybe I need to work on this in order to push my calligraphy project more toward its intended objective of creating art.  After all, I didn't take on this year of daily art to become a better monk copying the Bible.

And speaking of not being able to read the text, here's my favorite miniature of the week: 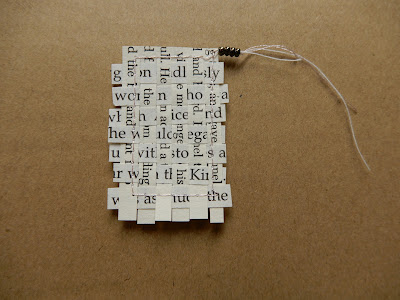 You can check out all my daily art here.
Posted by Kathleen Loomis at 7:53 PM