Babies on my mind -- finally here!!

We finally have a new baby, Owen, a big boy at 8 pounds 11 ounces! Tomorrow morning I’ll put a present in the mail for him – finished a couple of days ago, so it doesn’t have his name on it. But it will be there the day after he comes home from the hospital. The present is a newborn quilt.

We now know that babies don’t develop the ability to differentiate colors until they’re about three months old, but they can see the high contrast of black and white. So the earliest quilts and toys should not be in primary colors or baby pastels, but B&W.

I learned this by accident 11 years ago when my nephew Robbie, not yet three months old, was visiting. A black and white quilt that I had made many years ago was draped over the sofa where we plunked the baby, and we were surprised to see that he was attentively “reading” it and would do so for a remarkably long time. I immediately made him his own little B&W quilt but it was too bad I didn’t do so earlier.

The next baby in the family didn’t come along till 2008, and I made him a B&W quilt right away. Here’s Justin (who’s now a big brother) at six days old, paying very close attention to his reading. 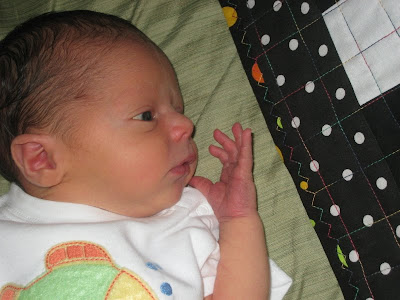 For Robbie’s quilt I gathered up a bunch of different B&W fabrics and just cut squares from each one. For both Justin’s and Owen’s I was feeling ambitious so I went into my boxes of pieces from Nancy Crow workshops and found a bunch of B&W studies that I sliced and diced a bit, then sewed together into the baby quilt. In both cases I added a bit of commercial polka dot fabric for a border. 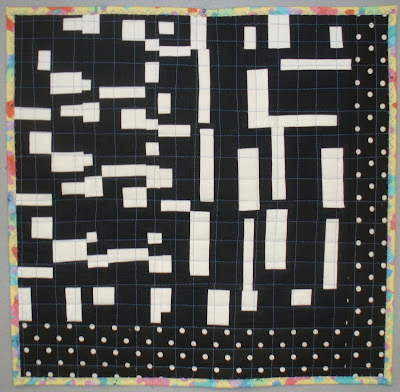 Posted by Kathleen Loomis at 5:14 PM