As part of the opening weekend of Fiberart International, the sponsoring Fiberarts Guild of Pittsburgh put on a day-long forum with a refreshingly simple format – artists with work in the show would stand in front of their work for an hour, and people could walk around and talk to them. Of the 78 artists in the show, 43 were scheduled to participate in the forum. A few artists from Europe were on hand, having embarked before the volcano grounded air traffic, but several others didn’t make it.

Every artist that I talked to was happy to let you touch the work, turn it over to see the back, take pictures or otherwise poke and prod. Of course, isn’t that the very best part of hanging out with other artists? What is more exhilarating than what we high-mindedly call the studio visit? Which of course is nothing more than seeing a lot of somebody’s work, talking about it, touching it, getting to know it up close.

Some of the conversations were educational. Wendeanne Stitt told us how she prepares Hawaiian bark cloth in the traditional manner – it starts with growing the trees to the proper diameter and proceeds through soaking, scraping and other time-consuming steps.  Her title, Shark Teeth, refers both to the pattern and the tool used to scrape the bark. 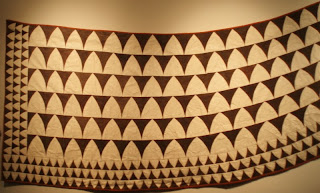 Some were personal. Anne Wolf told us how she started turning old jeans into 3-D, anatomically correct human hearts about the time her newborn son needed to have heart surgery. 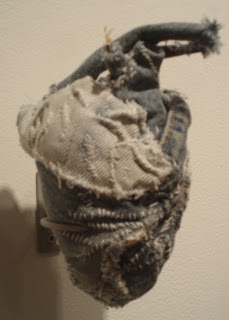 Anne Wolf, Hearts for LM  (one of six in the display)

Some provided insights into the artist’s larger body of work. Rebecca Siemering told us how she picks up lottery tickets from the street (or these days, receives them in huge quantities from friends who pick them up from their streets) to make objects like her man’s suit in the show, or flags.  (From up close it's hard to see that the suit has stars and stripes; at the crowded opening reception I didn't see this, but the next day I was able to see the work from across the room and discern the colors.) 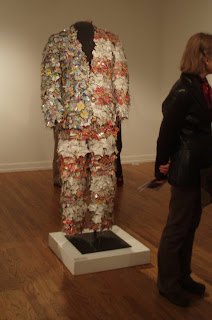 Some were helpful in figuring out just how large pieces of work had been constructed. Barbara Wisnoski described how she strip-pieces bits of fabric together into large expanses, then slices the expanses into small strips and reassembles them without any background layer.  This piece is 60 inches in diameter; I put my finger into the detail shot for scale. 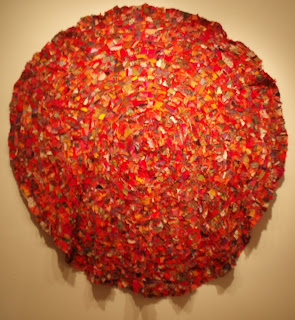 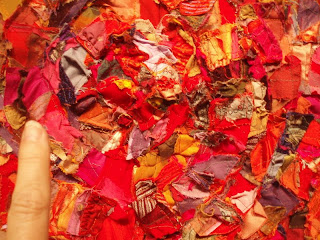 I liked this format a lot. I’ve sat through too many panel discussions and presentations where for one reason or another – a poorly prepared speaker, a microphone hog, a problem with the slide projector, a program running late – the audience never gets its money’s worth. How refreshing to just be able to talk with the artists, see the work up close, ask questions, unmediated by technology or distance. Many of the artists brought along supporting materials such as samples of their materials, photos of their work in progress or scrapbooks of their other works. There was plenty of time to engage with one artist for a while or to make the rounds and talk to everybody. And as a participant I was very pleased with the attentive volunteers who made my every move easy and comfortable.

Congratulations and thanks to the Fiberarts Guild for putting on a most pleasant day.

Posted by Kathleen Loomis at 9:19 PM