A couple of people have written me about my recent post on writing, and said they are interested in writing on fabric. Following my breakthroughs on writing on paper, I have also begun to write on fabric.

You may have read that I participated in a collaborative venture last year organized by Terry Jarrard-Dimond, and she gave me the leftovers from that project to sew together. One of the participants, Gayle Pritchard, had drawn with fabric marker on red fabric, and not all of that fabric had made it into the finished quilt. I considered whether to discard that fabric in making my leftover project, and decided not to. I was pleased that the marks gave a little extra life to the piece I sewed.

I thought maybe it would be fun to make my own marks instead of just cut up Gayle’s work, and decided to write rather than draw. Having recently taken my eye-opening workshop with Laurie Doctor, I thought it was a good idea to keep my writing unreadable. I didn’t want people to focus on what I was saying, just see that the writing was there as a secret subtext that they might guess at but could never decipher.

My work method in many of the quilts I’m working on now is to strip piece expanses of fabric, slice them into more strips and then reassemble. I used a fabric marker and wrote relatively large – a line of writing would fit comfortably onto a 1-1/2-inch strip. 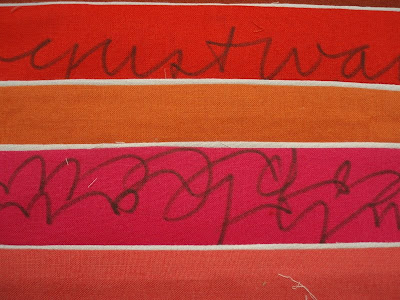 Here’s a picture of stage one in the strip piecing. You can still make out some words but that will be impossible once I slice the strips in the other direction. 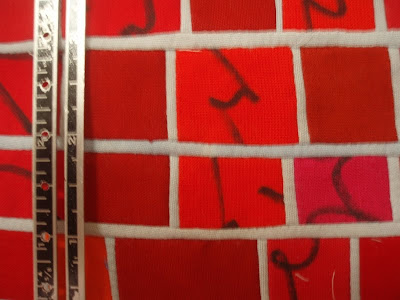 Here’s a picture of the finished piecing, with a ruler for scale.

As I piece, I’m playing with how I distribute the writing across the quilt. Some areas are relatively dense, with writing in almost every little piece. Others have sizable expanses with no writing at all. I like the overall effect and think I’ll continue to use it.

Posted by Kathleen Loomis at 11:14 PM