Now that taxes are over with, it’s time for fun – the April quilt date! You will recall that I promised to introduce you every month to a new concept or technique. After one date maybe you will have had enough, or maybe you will want to see him a lot more. This month’s date is another piecing technique, this one to make very, very thin lines.

I like to piece in lines about 1/8 inch wide, and I like them to be as uniform in width as I can make them. I know that many other quilters like to use the swoopy pieced line – shaped like the Coca-Cola swash, with wides and narrows – but that’s not the look I’m after. And I like to cross one narrow pieced-in line with another one, often at odd angles. It took me a while to figure out the best technique to get the lines to look sharp and the quilt to lie flat.

I use much narrower seam allowances than you typically find in quilting – more like 1/8 inch than 1/4 inch. I cut my strips a shade under 1/2 inch wide, and always on the cross grain, so the fabric has some give. In my earliest attempt to piece very narrow strips I cut them on the lengthwise grain (that seemed the logical thing to do) but realized that they had no stretch at all and after stitching, they seemed to tighten up a bit. As a result, the larger pieces of fabric on either side of the narrow strip seemed to pucker and bulge out, and no amount of pressing could save the day. When I switched to cross grain, everything lay beautifully flat.

Here’s my routine for making a quilt like Fault Lines. Fault Lines 3 will be on display in Europe this summer. I can't show you the whole quilt yet, but I had a detail of it in a recent post.  And I will be teaching the technique in a workshop in Japan this summer, part of my wonderful Quilts Japan Prize from Quilt National last year.

In brief, I start with a large expanse of fabric and cut a slice down the middle. I piece in a very narrow strip and the fabric expanse is restored. Then I slice across the entire fabric in another direction and piece in another narrow strip. Eventually the strips criss-cross into a complex pattern. 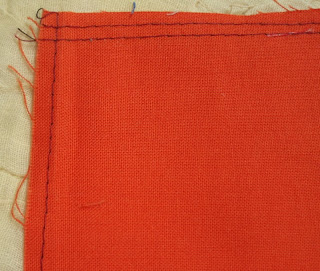 Step 1: Cut a piece of fabric larger than you want your finished piece to be. Mark two adjacent edges of the fabric – I generally put one line of stitching on one edge, and two lines of stitching on the other edge, but you could use a marker or different colors of thread. This will help you remember which side is up (this is more an issue than you might think). 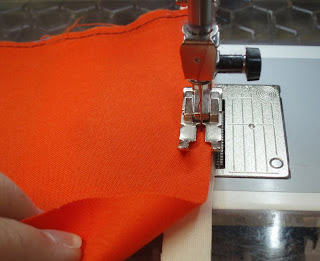 Step 2: Holding the fabric with one of the marked edges up (away from you on the cutting mat), slice the fabric from top edge to bottom edge. Put the left-hand piece aside or on your design wall. Flip the right-hand piece face down, keeping the marked edge up (away from you/first through the sewing machine). Layer the narrow strip underneath it. Stitch about 1/8 inch from the edge. Do not press. 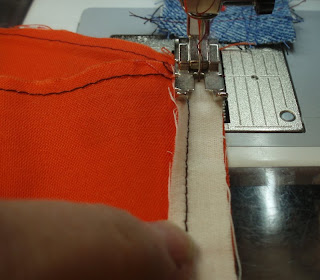 Step 4: Stitch down the narrow strip. This is not like most quilt piecing, where you watch the edges of the fabric to make sure you’re keeping a uniform seam allowance and sewing in the right place. Instead, you watch the seam line at the left of the narrow strip. You want to position your stitching so the strip maintains a uniform width. That means the seam allowance at the right may be uneven, but that’s OK, nobody will see it.

Meanwhile, your left hand will be busy gently tugging the top piece of fabric outward so it doesn’t ooze underneath and get caught in the stitching (remember, you haven't pressed that first seam, and its natural inclination is to NOT lie open). 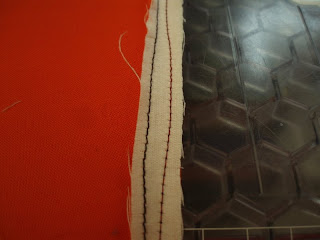 Step 5: Inspect the narrow strip and see if you did a good job of maintaining uniform width. If not, go back and restitch. Mistakes almost always occur when the presser foot drifts too far to the right, as in this photo.


This happens because the layers of fabric are much higher on the left – especially later on in the quilt where you’re crossing previous piecing -- so the presser foot slides off to the right, making your strip too wide. You don’t have to rip out the bad stitching, just put a new line of stitching inside it at the correct place. 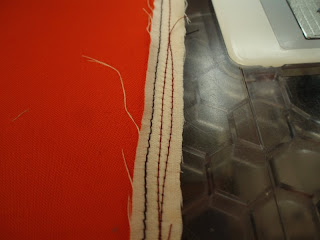 Which side should you press toward? Find the marked edge that was on “top” where you started this seam. Now identify the OTHER marked edge. Press your seam allowance AWAY FROM the other marked edge. You’ll see why in a minute. 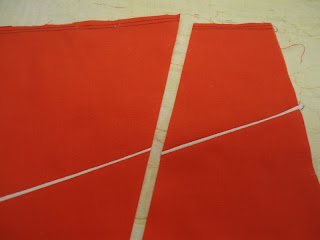 Step 7: Slice the quilt in another direction so the slice crosses a previous strip. Arrange your pieces so the marked edge is at the top (this is not the same marked edge you had on top for the first seam – it’s the other marked edge). When you cross your previous stitching the seam allowances will be pointing toward you and away from the machine. 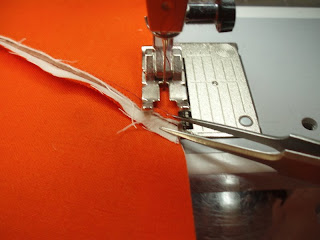 That means they’ll feed into the presser foot seam first. If they feed seam allowance first, they can easily get caught in the feed dogs and turn over, making bulges and lumps. 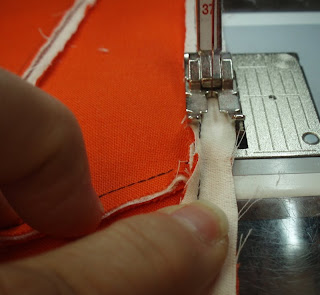 Step 8: As the quilt gets more complex and your lines of piecing cross previous lines, you will get to intersections where you think it’s impossible to stitch a straight seam. There are so many layers of fabric where a seam allowance has been pressed back on itself that it’s like mogul skiing – huge bumps and lumps that you need to navigate across. 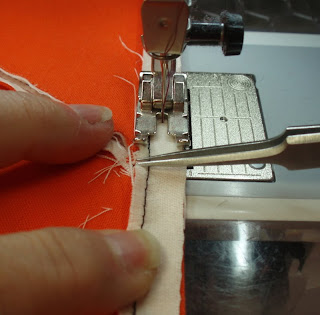 The way I do it is to use my needle-nose tweezers to hold down the bumps and lumps so I can sew past them.

As the quilt gets more complex you will also find it more challenging to decide where to place your next slice. Don’t go too close to a previous intersection, because it’s very difficult to piece across so many layers of fabric. If you use a lucite ruler you can see the whole quilt and make sure your slice is going in a good place.

I like the slippage effect when the pieces get put back together – the intersecting lines don’t match up exactly on either side of the new line. In fact, the slippage is why I decided to name my series “Fault Lines.” You’ll also notice as you make more slices that the edges of the quilt can get very ragged. That’s to be expected; you’ll have to trim off a fair amount of fabric at the end of the project.

I suggest a small sample, maybe 14 x 20. It will shrink with each slice, but this way you can make several lines in each direction and it will still be big enough for a placemat, if it comes to that. I also suggest you choose a fabric for the lines that is lighter in color than the background. That’s to eliminate potential problems with show-through.

• Experiment with different angles and densities of lines. For instance, here’s a quilt where all the cuts are at right angles – a totally different mood. 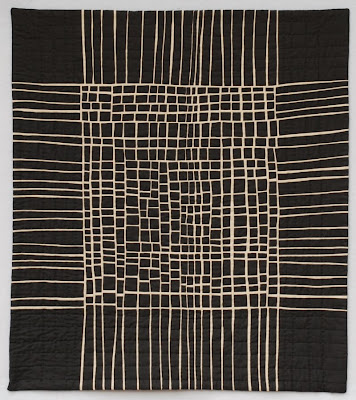 Posted by Kathleen Loomis at 8:52 AM