Well, enough about children for a while -- let's write about grownups.  It seems that every day on the Quiltart email list somebody posts a message inviting people to visit her blog, look at her currently stalled work in progress, and give suggestions. Or maybe to look at her new quilt and suggest a name for it. And apparently many people respond to such calls for help.

I have been known to put out calls for help, too, but only to my closest art friends. The thought of posting a work in crisis for the whole world to see strikes me as only slightly less horrifying than walking down the street in my underwear. Which brings me to the subject of critique.

Half of me loves to get comments from people on work in progress (at least from people I respect and trust). The other half feels slightly guilty, as though a Real Artist communes only with His-or-her Own Self and God, and other people’s opinions can only pollute the Holy Mystique of Making Art.

So when Van Gogh and Gauguin were hanging out together in the south of France, did they each in turn put their work out in the evening so the other could point out what looked nice and what part was awkwardly painted? Did they give one another suggestions for what to do tomorrow? If one guy despaired that his picture was crap, did the other one console him, oh, it isn’t really that bad, just fix that part in the left-hand corner and it will be quite nice, don’t be so hard on yourself?  Did they ever say, this is not your best work, put it away and start something else?  Somehow I have a hard time thinking they operated that way.

I have been in a small critique/support group for something like a dozen years and it is the most important relationship in my artistic life. We know each other so well that we don’t have to spend time explaining where each new piece came from; the others know whether it’s another in your continuing series or a dramatic new concept. When we comment, we can make analogies to the piece you did three years ago or the time you switched from stretched work to loose display. We love each other, but are willing to say when we think something doesn’t work -- and willing to listen when the others say that. Kind of like being married for a l-o-n-g time.

This week I took three pieces in fairly advanced stages of construction to our meeting for critique.  I have been sewing frantically for weeks, feeling very nervous about the impending Quilt National entry deadline. It’s not till September, but my summer calendar is already silting over with travel plans. And I want to work BIG. Since our last meeting, I have made about 50 square feet of piecing so it covered a lot of display wall, and it was all new since last month.

There’s a much better display wall at our meetings than in my studio, and I’m always surprised at how different my own work looks when I see it in the new context. Or maybe it's just seeing it in the presence of others.  One piece accounted for two weeks of work, at which point I was convinced it was ruined, took it down from the wall, folded it up and started something new. But this week when I put the pieces back up on the wall, my friends thought it was wonderful.

A second piece was about 96% finished, I thought, and I expected oohs and aahs when it went up on the wall. Instead the reaction was subdued. They were worried about how I was going to quilt it (I wasn’t worried about that at all). Instead I was worried about what additional piecing had to be done (they said don’t do any more; it’s finished). I loved the way the top half looked but was disappointed in the bottom half (they loved the bottom half but weren’t sure about the top).

I decided maybe this wasn’t as great a work as I had thought while I was making it. Still don’t know how this is going to play out, whether my doubts will evaporate or remain.

The third piece had originally been conceived as the second part of a diptych with the first piece but about the time I took the first piece down in disgust I came to the conclusion the two pieces did not play well together (my friends agreed). I liked the third piece a lot more than the first one, but after the critique I felt less positive.  But this one is in its earliest stages; it has a long way to go yet.

So I drove home feeling dubious. It will take a while to digest what everybody said, and my own second thoughts. In the past I have sometimes done what my friends suggested, sometimes ignored their comments entirely. I spent yesterday working on the third piece, fixing a construction problem that I had been ignoring until the critique made me realize it had to be dealt with, and the sooner the better.

You will notice I am not posting photos of the three pieces and inviting suggestions from my blog readers. Even if I wanted a whole lot of additional input, Quilt National won’t accept work that has been seen in public. I think the rules still allow posting on the artist’s own blog, but once it’s on your blog it’s up for grabs in cyberspace, and why would anybody take the chance that an unwitting or malicious websurfer might grab your image, post it elsewhere and tank your dreams of glory?

But I will post a couple of detail shots so you can see the type of piecing I'm doing. 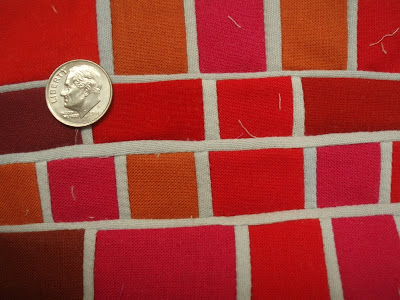 the first piece (I was unhappy; my friends loved it) 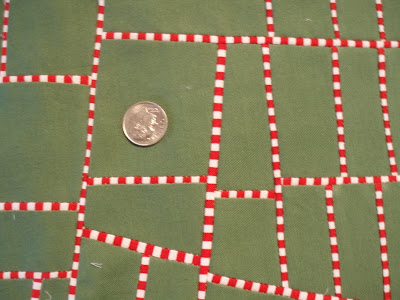 the second piece (I liked the parts they didn't, and vice versa) 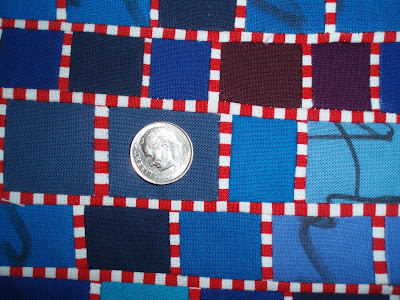 the third piece (not very far along)
Posted by Kathleen Loomis at 5:55 PM