My father was quite a guy in his day. He was one of the most important figures in newspaper typography, changing the looks of newspapers throughout the Americas in the 1960s and 70s. He took them from stodgy, gray and ponderous to light, readable and appealing. He was totally self-taught as a visual practitioner and connoisseur; as a very young man he took up lettering and made signs, invitations, certificates and cards by the gazillion for the rest of his life. He loved art, painted occasionally, drew wonderful cartoons and was a prodigious collector, although I don’t think he ever took a course, either in art history or art studio practice. He raised all his children to be art lovers and art owners, equally at home in museums and art shows. (Not galleries – we preferred to acquire our art cheap and direct.)

As a little child, I sat in my high chair while he would simultaneously make art and babysit. As I grew up, I retained my customary position over his left shoulder watching him at his drawing board. I can’t tell how many hundreds of hours I spent in my life watching him at work.

Curiously, for a much-doted-upon Daddy’s girl, I never had my own drawing board or my own pens to work with in parallel to him.  He didn't provide them (although I did get my own typewriter at age 4) and I never thought to ask.  At a certain point in my teenage, Dad suggested I might learn calligraphy, and I obediently got a broad-nib pen and tried to write a fine Italian hand. But my taste in calligraphy was light-years ahead of my ability and I couldn’t stand to look at my own clumsy writing, so that endeavor was quickly abandoned.

I had known from early childhood that I couldn’t draw, and now I knew I couldn’t do beautiful writing (my ordinary handwriting was decent, and totally legible, but it sure wasn’t calligraphy). Decades later when I decided to become an artist I realized that I had a huge mental block regarding pens, pencils, brushes, crayons or any other standard mark-making tools.

I could make marks with confidence and character using a squeeze bottle. This allowed me to make good work using dishwasher gel for bleach discharge. (It also allowed me to make beautiful marks with olive oil in a frying pan, somewhat less applicable for my artistic ambitions.) I could also make great marks with a sewing machine, leading to lots of beautifully quilted work.

But put me in the same room with a piece of paper and I froze. For some reason this was a source of unhappiness. I could easily make art for the rest of my life by sewing – and I still think of sewing as my “real” art – but I want to do something with paper. I did make some tentative progress with collage (not too bad with scissors and glue) but could not do anything with writing implements.

Then something wonderful happened. Last winter I took a series of workshops with Laurie Doctor, a calligrapher and painter whose work I love. She set us to work with an exercise she calls “writing, writing, writing” – you spend 15 or 20 minutes writing continuously, never lifting your pen or pencil from the paper, writing backwards and forwards and on top of stuff you already wrote, sometimes with your eyes closed, sometimes with a white pen so you can’t even see what you’re writing. She told us to write actual words, rather than scribbles, but that we could (should?) make them illegible and thus secret so we didn’t have to feel self-conscious.

A few hours into the class I felt a door open up in my head. In this new place, writing didn’t have to be readable!! You have to understand that my entire life had been spent believing that the sole purpose of writing was to convey information. My dad’s whole professional life, summed up in one word, was readability, and as a family we believed in legibility and readability right up there with God. So this new idea was life-changing.

Next, Laurie had us write with a mussel shell, dipping the pointed end into the ink. It made an irregular and unpredictable line and I was enthralled by how crudely I could make my letters and still be happy. In fact, the cruder the letters, the happier I was! Wobbles and blobs and lopsided ovals only added to the character and strength of the writing.

Laurie wanted us to practice at home in between workshops, and about then I came upon a jar of Dad’s pens. He died in 2007, my mother died in 2008 and I still don’t have all their possessions totally organized and in place. So finding the pens right when I could use them was a little omen. I was amazed that my five minutes a day of writing turned into an hour or two – all I wanted to do was turn on the radio, make a cup of tea and write with a pen.

And in that lovely zen state I feel so close to my father, as though now he’s sitting over my left shoulder watching, just as I watched over his shoulder for so many years. I feel that I am channeling his inner calligrapher, the one that has now been liberated from being readable and pretty and nice. I suspect it never crossed his mind to be liberated from all that he held dear. But I also suspect that the same secret rooms existed in his head – maybe exist in all our heads – and he just never had the chance to see those doors open. What a joy now for me to be walking with him down this wonderful and totally unexpected path! 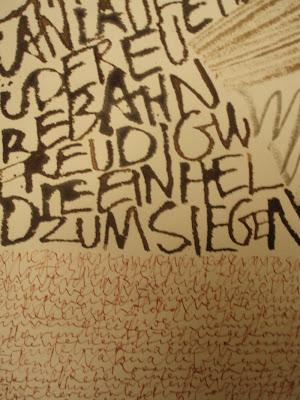 top -- writing with a mussel shell -- not beautiful!