I was thrilled and honored to win the Quilts Japan Prize at last year’s Quilt National, an award given by Nihon Vogue magazine to commemorate the ties between US and Japanese quilters. The award is a trip to Japan, during which I will teach a workshop.


The trip occurs in July and for the last several weeks many, many emails have been exchanged working out the details of the workshop and its publicity. I wanted to teach my technique for piecing very thin lines – the same one that I introduced to you as the Quilt Date for April. Imagine my surprise when the Japanese organizers asked whether I could teach this as a hand-piecing project rather than using the sewing machine! “We Japanese quilters love our hand piecing,” they wrote me.

After some contemplation of alternatives, I told them I could teach it to hand-piecers, but we will have a few sewing machines in the room as well. (My suspicion is that after people hand-piece a couple of very thin lines they may decide that now is the time to get over their sewing machine anxieties.)

Since my total lifetime hand-piecing experience has probably involved about one yard of thread, I thought it might be a good idea to test-drive this concept before I get to Japan. So yesterday I spent the day with the Piecemakers of Lyndon Baptist Church, a delightful group of ladies who all have far more hand-piecing experience than I will ever have. We all made samples with very thin pieced lines.

As you might expect, we all learned a lot from the experience, and probably I learned the most. Our first realization was that when you hand-piece a 15-inch seam it is prone to pucker and ruffle. We talked about that and decided that hand-piecers rarely make seams that long; they’re far more likely to work with small blocks and with shorter seams, there’s less opportunity for the two pieces of cloth to get out of synch with one another. Solution: we stopped every now and then as we sewed to smooth and tug on the seams to keep them straight, and the people who were sewing 20 stitches to the inch, secured with backstitches, lengthened their stitches a little so the seams didn’t tighten up.

My second realization was that my process for keeping everything in place while machine-stitching didn’t work with hand-piecing. After you get your two pieces of fabric in place to sew a seam, the machine-stitcher will start at the left side and sew toward the right (actually, you will turn the whole package 90 degrees and sew from top to bottom). But the hand-stitcher will start at the right side and sew toward the left. So my well-planned organizational method of which side you stitch first and how you mark your edges to keep things in order was literally topsy-turvy. The one left-handed piecer in the group was the only one who was able to sew the seam the way I told her to.

My third realization -- the most serious – was that hand-stitched seams come apart far more readily than machine-stitched. So when I sliced across my previously-pieced strip to insert a second strip, the first set of seams entirely lost their footing and came apart. On my own sample I stopped and resewed the first half-inch or so of an opened seam before I stitched the crossing seam, but I missed another seam that had also lost its firmness. I didn’t discover that one until I had completed the seam and pressed it, and then realized my error. In real life I should have ripped back the second seam, repaired the first one, then resewed the second one, but this being a practice piece I just muttered. All of a sudden those 20-stitches-to-the-inch-plus-some-backstitches ladies didn’t seem so misguided after all. 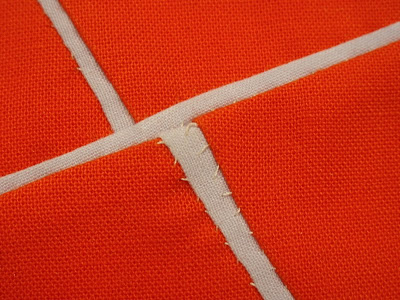 Note how the seam at the bottom has gotten much wider than it should as the cut thread lost its tension and allowed the fabric to spread apart and the stitches to hang out.  Nasty!

This is a problem that I will have to think about a great deal before I hit Japan. Shall I tell people to slice their work open, then immediately add new stitching to the ends of the cut seams to secure them? Should they stitch along the cut edge for an inch to secure the ends? Or could a judiciously applied pin or two hold things together long enough for the new seam to cross the first one?

Any hand-piecers in cyberspace who have experience in this sort of thing, please feel free to send me all the advice you can think of!!

Most of the ladies started with fabric that was about 15 inches square. It took us about an hour to piece in one thin strip, then cross it with a second one – four lines of stitching, plus some time for pressing and thinking. At that rate it would take a long time to piece an entire quilt, so I suspect the Japanese students will have to use this technique more sparingly than I might do myself with my sewing machine. But knowing the Japanese artistic sensibilities, their lines will probably be far more elegant than mine.

Posted by Kathleen Loomis at 7:17 PM