I wrote last week about text in art, and said that I think using found writing is a good way to avoid the self-conscious, heavy-handed effect that sometimes occurs when artists use words to augment their visual imagery. Today I’d like to share a remarkable work of art made by my friend Bette Levy. Bette is best known for her beautiful silk embroidery but for a recent show she made two stunning pieces from found writing.

The found writing was her own – her parents had saved every one of the letters she wrote home in college and for years after graduation. She took the fronts of each of the envelopes, arranged them chronologically, stitched them together in rows, then coated everything in wax and suspended the envelopes from a rod. 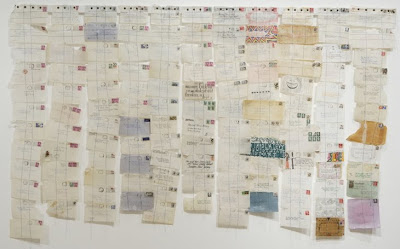 Bette Levy -- A Life and Times 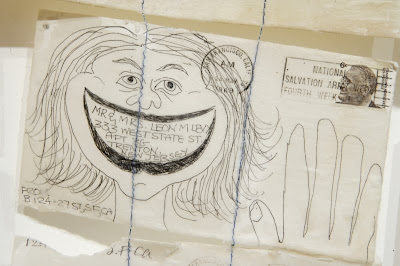 A Life and Times -- detail

She also treated the letters in the same way – except she cut them into small pieces first, not wanting people to be able to read them. 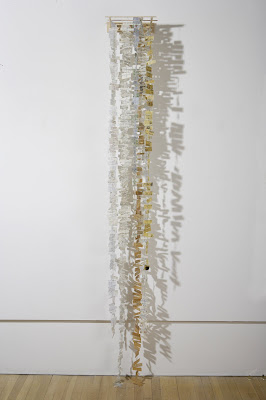 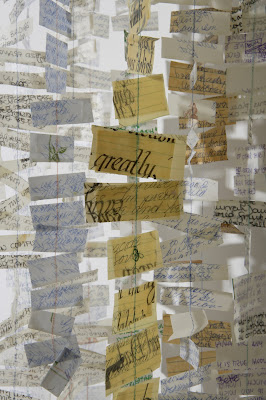 What made these two pieces so powerful was the reality of the letters having been kept through the years. Bette said in a gallery talk that she thought at first the two artworks were about her: how the envelopes reflected the changes in her own life, becoming more colorful, more dramatic, more psychedelic. But as she worked on the project she realized that the artworks were about her parents, who kept the letters and loved her even though they didn’t fully understand or approve of her hippie lifestyle.

One of the classic messages in art is the expression of love, and it’s not all that simple to achieve that honestly yet simply. Many artists have done it by picturing their loved ones; Bette has done it with the potent metaphor of letters as connections. I suppose you could also do it by putting the word “love” on your artwork, but could that possibly be anywhere near as elegant and understated and powerful as Bette’s envelopes?

Posted by Kathleen Loomis at 8:45 PM