Today would have been my mother’s 95th birthday had she not died in 2008. I want to take a few minutes to tell the world how great she was.

If you read chick lit or women’s magazines you would think that every woman in the world has unpleasant issues with her mother. That wasn’t true with me. Outside of the usual teenage conversations about you aren’t leaving the house wearing THAT or get off the phone this minute and clean your room or the usual adult recriminations about why didn’t you let me go to MIT I could have gotten in on the ground floor of computers and be filthy rich today, I don’t believe we ever had a serious disagreement in our lives.

In the 50s and 60s when feminism hadn’t been invented and women were still hobbled by limited expectations, my mother (and father) never once intimated that there was anything in the world I couldn’t do. (Except go to MIT, which Mom did have a point about, namely that I had skipped grades and maybe was too young to go away from home just yet.) My mother never once in her life told me that I should be worried about never having a date, or that it was time I start thinking about getting married, or did I really want to marry a guy that much older than I was (yes, I really did, and we celebrated our 40th anniversary yesterday) or that I should get pregnant so she could have a grandchild already, or that I should stay home with my adorable little boys instead of going back to work or that I should visit her more often.

As with many women married to high-achieving men, my mother was an enabler in the very best sense of the word. She took care of Dad and us three kids, and her parents and mother-in-law as they aged, and people at church or next door who had fallen on hard times, and sent money to FINCA to help women in third-world nations. That’s not to say it cramped her style. Sometimes when we kids were in the teenage vicinity, Mom would announce at the dinner table that day after tomorrow she was going to Michigan and visit her parents for a week or so, and if anybody needed anything done before she left, speak up now. And then she would do everything everybody needed, and hit the road.

Earlier in our lives she would pile us in the car and head for Michigan by herself, 800 miles in two long days. We’d stop to heat up my brother’s baby bottle on the engine, and I would feed him as we drove. Once we got an hour up the road and realized the car had a carbon monoxide leak, so Mom found a garage to fix it. (Had Dad been along, it would have probably worked out the same way: Mom would have found a garage to fix it.) That was the quintessence of her approach to life: if something is broken, don’t panic, just fix it.

I have probably been in a beauty parlor less than a dozen times in my life, because my mother always cut my hair, even when I lived in Europe (I came home every now and then) and when we lived 400 or 800 miles apart. Being 400 or 800 miles apart did stop Mom from providing me with regular childcare, although she was happy to let me park our first son with her for three months (age 18-21 months) while we toured Europe, and to let both the boys stay with her for a week here and there if I needed to take a long business trip.

She raised us to be tough, self-sufficient, resourceful, responsible, proud and unafraid.

Just to make this art-related, here’s a quilt that I made several years ago that features my mother. It was part of the “I Remember Mama” exhibit in Houston and Chicago and the book of the same name. It commemorates the important place that textiles had in the lives of so many women in the past – sometimes as place markers of drudgery, sometimes as occasions for beauty and creativity. 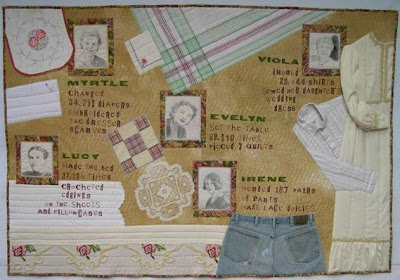 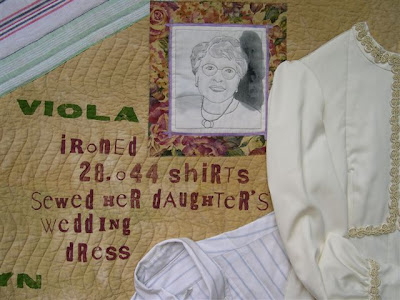 Happy birthday, Mom, and thanks for everything. I miss you.

Posted by Kathleen Loomis at 8:51 PM