As with anything that’s entwined with your whole life and soul, I have a certain ambivalence about text in art. That is, pictures with words in them.

I spent my career writing for a living and when I decided, upon retirement, to be an artist, I struggled with how to express myself in images rather than words. This was foreign territory to me. For several years, in fact, I made quilts using letters of the alphabet as kind of a compromise.

The alphabet, of course, lives somewhere in between word and image. It’s indispensable to making words, but it is not the same thing as words. Other alphabets may use ideographs, where you have a symbol for “ox,” but ours has evolved over the millenia and the symbol for ox has long since become A. Working in this halfway place allowed me to walk for some time with one foot on each side of the street, learning to work with images without entirely abandoning the old familiar words.

I had a solo show in 2005 with a quilt for every letter of the alphabet. When the show was over, I decided I was done with the alphabet, at least for the time being, and since then have become more confident in using images alone to say what I want to say. I like to give a little clue in the title, but let the viewer figure the rest out (or not). 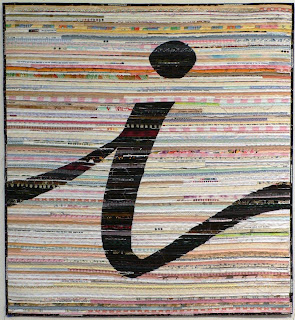 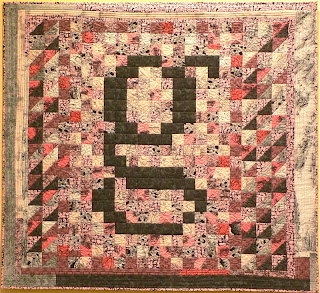 
Similarly, I tend to be wary of text in other people’s work. I think that in many cases, people use words as labels or signs to convey meaning they can’t do in images. To my eye, these labels often seem heavy-handed. And I think I see them far more frequently in fiber art than in other mediums.

I’m especially annoyed at the cheesy signs that you can buy at the craft store ready to affix to your “art” – you know, the little metal doodads that say “inspiration” or “love” or “friends.” Don’t like using faux scrabble tiles or old typewriter keys to spell out “sisters.” Don’t like using rubber stamps that say “Paris” or “Casablanca.” But I digress. That stuff isn’t art, it’s middle-aged ladies playing at art using other people’s ideas.

On the other hand…

Having given this a lot of thought, I now wonder if one way to avoid the HH&C effect is to use found writing. I am happy using printed materials in my paper collage works, because the words are incidental. The words may be readable, but they‘re not there because of what they say.

Found writing is to deliberate writing as unposed photos are to portraits – and maybe not just unposed photos, but photos taken without the subjects even knowing they were being photographed. There is a place for portraits, but the unposed, even surreptitious snapshot often reveals far more and is far more interesting.

Jeanne Beck, whose blog I follow and from whom I had the pleasure of taking a workshop several years ago, has embarked on a new project where she’s collecting handwriting from as many different people as possible. If you’d like to participate, here’s what she wants. I’m very interested to see what she will do with it!

Posted by Kathleen Loomis at 1:16 PM