I have a love-hate relationship with quilting.  I love it because it adds such texture to my pieces, and because I can draw with the quilting line in ways that I can't do with a pencil.  I love the intellectual part of quilting -- deciding the overall pattern and concept for each piece, and exactly where to place each line, how far away from its neighbor, whether to cross another quilting line or not, whether to cross a seam line or not.

But I hate it because it places such physical demands on me when I work in my favorite scale, namely huge.  I have quilted four or five pieces in my lifetime that were about seven feet square, some with free motion and some with a walking foot.  (I don't now and will never have a longarm machine; this is all done on my plain old Bernina, not even the long-harp Bernina.)  Quilting big pieces on a home sewing machine gets you primarily in the shoulders and the upper back; after a day of work you're ready for aspirin and three glasses of wine.  It's kind of like wrestling an alligator for six hours.

But the piece I'm working on now isn't that big -- less than five feet in either direction -- so it shouldn't be that big a deal to quilt it up.  And indeed, the project has been going speedily and efficiently, until this evening.  When as I shifted my hands to guide the folded-up quilt bundle under the presser foot, I came upon a wad of fabric that most definitely didn't belong.  Turned it over, and here's what I found on the back: 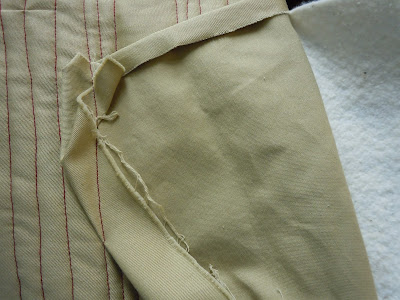 I always leave a few extra inches of backing and batting around the edges of the quilt, because the top has a way of creeping outward as it's stitched, and it's no fun to have the top become larger than the underlayers.  As long as all the fabric is pinned or basted or clipped in place, it's fine, but as you get out toward the edges, with bad management you can let it loose and it often gets into trouble.

Fortunately this gaffe was about as easily remedied as could be, requiring me to rip only six inches of one row.  I was back in business in less than fifteen minutes.  I've done a lot worse, once requiring a whole day to rip out what I did wrong.

By the way, you may have noticed several rows of stitching farther toward the edge of the quilt than the troublesome one, and might wonder what order I am quilting in.

From the standpoint of a perfectly flat quilt, with no wrinkles, pleats or bulges, I want to start in the middle of a quilt and stitch outwards, each row in order, then flip it around and stitch outwards toward the other edge.  But on this quilt I'm changing colors of the top thread, so I'm quilting rows as much as an inch or two apart, then going back later and filling in with another color.

After I got myself out of trouble, I quilted for a few hours more, and have finished all the vertical stitching.  Tomorrow I'll start on the horizontal part of the grid, which will be much easier, now that the entire quilt is stabilized -- no pins to attack me, and after I trim the edges, no loose expanses of fabric to sneak out and get themselves into a wad.
Posted by Kathleen Loomis at 10:18 PM