On our trip to Germany last summer we visited more museums than I can count without a cheat sheet, and I have written about most of them on the blog last year.  But one I never got around to telling you about.  It is in Bramsche, near Osnabruck in northern Germany, and we found it quite by accident because the tourist office, where we needed to stop to find a hotel room, happened to be located in its lobby.  When my husband came back to the car he said "there's a museum in this building we might want to go to, but I don't know what it is about."  The sign over the door said Tuchmachermuseum; I'm embarrassed to say I had to look it up in my little dictionary.

When I translated it as "clothmaking," I let out a whoop of joy!

Sure enough, the building itself was an old woolen mill, in operation on this river for 400 years.  Its specialty was heavy fabric in a special shade of red, used primarily for British army uniforms.  It operated as a factory until 1972.   Most of the equipment was about a hundred years old, and some machines, acquired by the museum from the old East Germany after reunification were in use in that technologically challenged country until late in the 20th century.  The museum depicts all the steps in the traditional carding, spinning, weaving and finishing of cloth.

We found one brochure in English, with a bit of explanation of how the museum came to be but nothing on the details of the machinery or the processes.  The signage was exclusively in German, and though I consulted my dictionary many times, most of the specialized terms were not listed.  The docent tour was similarly monolingual, but they did turn on most of the machines so we could see them in action.

The good news was that despite my ignorance of what was being told to me, I was able to figure out about 95% of what was going on.  It was one of those beautiful moments in which I realized that my decades of devotion to textiles and fabrics had paid off in ways I had not anticipated.

Although my total hands-on experience with weaving has consisted of maybe a total of 30 minutes sitting at other people's looms, weaving a few rows with wobbly selvages, I was able to figure out from watching the machines in action what was going on.  First the wool came in the front door and was washed and dyed, then combed and carded.  It was spun and wound onto bobbins, a hundred at a time.  The looms were warped and the shuttles were thrown from one side to another; on the jacquard looms the punch card "computer" overhead lifted the proper heddles in their turn to make patterns. 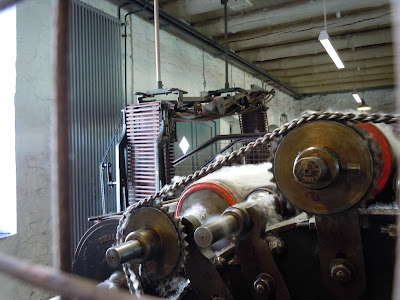 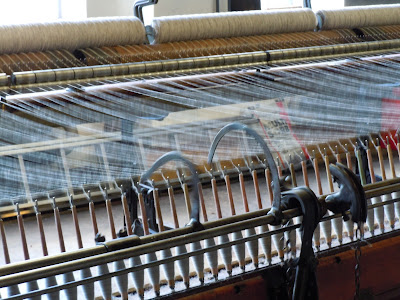 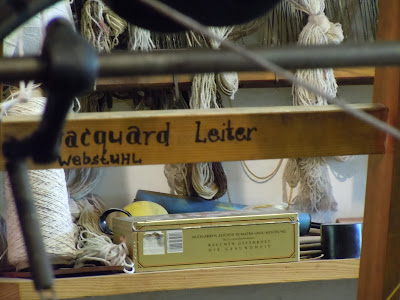 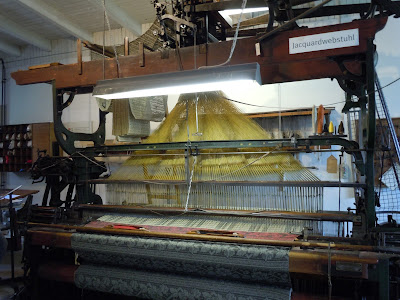 Then the easy parts, washing the fabric again, pressing it smooth and winding it onto bolts.  The occasional sewing machine and small loom to work out patterns stood by as needed.  You may not think you know anything about a woolen mill in action, but if you stood there all afternoon watching the machines at rest and at work you would figure out what was going on, too. 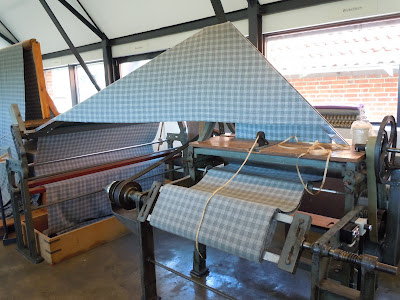 As I figured out each machine, I would explain it to my husband, who learned far more than he ever wanted to about textile production and was dying for a beer long before I was ready to leave.

It was a wonderful afternoon, making me realize how much I love fabrics of all kinds and how watching them made was truly an homage to my artistic roots.

I learned later, in checking my facts on the internet, that this museum is just one on a "theme route" of textile factories throughout the continent, sponsored by the European Route of Industrial Heritage.  In addition to textiles, you can check out other industries such as mining, iron and steel, transportation, manufacturing and a bunch of ther specialties.  What a great way to plan a leisurely European trip if you have a special interest in a certain field -- perhaps your own profession, or that of a parent or grandparent.
Posted by Kathleen Loomis at 8:54 PM