"Form, Not Function: Quilt Art at the Carnegie" is an annual juried show in New Albany IN that I have had the pleasure of being very closely associated with since its inception eight years ago.  Five years ago after we spent the day hanging the show, I commented to the others in the room that I was pleased to see a couple of quilts with somewhat edgy political messages.  It's long been one of my favorite rants that a lot of art quilts are just too darn nice, portraying a lot of sweethness and light and few darker thoughts or concerns.  So the others rolled their eyeballs waiting for me to carry on again on that subject.

Which I did for a bit, but then had an idea -- that perhaps I should put my money where my mouth was.  And since one of the people in the room was the director of the Carnegie Center, she was very happy to stick her hand out, take the check I wrote, and enable me to give an award for Political and Social Commentary.  And I've continued to do it every year since.

Past winners of the award have been Claire Fenton, Karen Stiehl Osborn, Shawn Quinlan and C. J. Pressma, and I like to think that giving the award has in a small way helped encourage people to make and enter quilts that have something to say about the contentious issues of our society.

But this year there was a wrinkle: the day the awards had to be chosen, I was on my way to Antarctica instead of at the museum looking at quilts!  I delegated the task of choosing "my winner" to Joanne Weis, who was one of the juror/judges of Form, Not Function.

When I got home and saw the show, I was pleased to see that the award had gone to someone I know, Caroline Szeremet, and that I love her quilt. 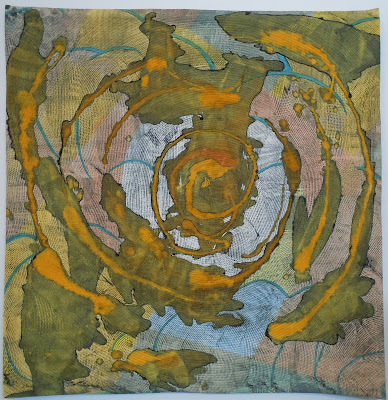 The quilt is a whole cloth monoprint and has beautiful detail in the surface design. 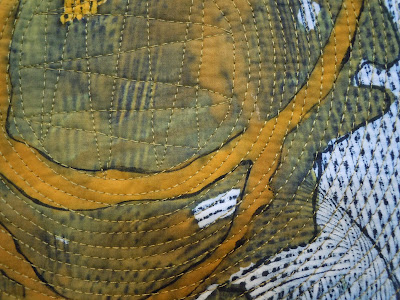 Without taking one iota of credit away from Caroline, I have to say that had I been there to do my own choosing, I would have had a hard time deciding between this piece and one by Shawn Quinlan.  Shawn does wonderful things with found fabrics, and obviously also has great sources for weird commercial prints which he combines in unexpected ways. 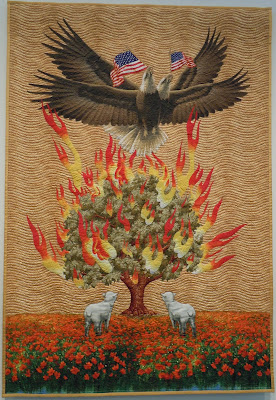 Since I like the concept of political commentary in quilt art, I'm particularly happy to see not one but two good quilts in that category in the same show.

Posted by Kathleen Loomis at 11:23 PM