I've just taken part in a fascinating exercise in audience participation, and you can do it too.  The Brooklyn Museum is preparing for an exhibit of old paintings from India, of which it owns a large collection.  To decide which ones to display, the museum is using an online survey, what it calls "crowd curation."

When you visit the website, you're first given a series of pairs of pictures, and only four seconds to choose the one you think is the most intriguing.  After you go through ten pairs, you're given the option to do ten more, and ten more, and as many tens more as you want (it's addictive).  With such a short time in which to decide, you really can't even articulate to yourself why you choose one over the other, and sometimes neither painting is particularly intriguing.

Eventually you will get tired of the speed test, and move on to another section of the survey.  Apparently different visitors get different kinds of questions, but the ones I got asked me to read a paragraph or two about Indian art, and this painting in particular, and then rate the painting on a scale from "meh" to "amazing."  (This is Brooklyn, after all; midwestern museums' scales would probably start at boring.)

The paragraphs were like chatty and informative wall signs; for instance: "In the fifteenth or sixteenth century, a new genre of painting developed that attempted to capture in imagery the moods of famous passages of classical music. The music, known as ragas or raginis, inspired artists to create little scenarios—happy or sad, fierce or quiet, taking place in the daytime or nighttime, the summer or winter—that were illustrated over and over again.  Like many ragini paintings, Dhayashri shows a woman who misses her beloved. Here, the woman (with green skin) paints a picture of her absent lover, hoping that this will magically conjure him up. Her friend sits with her, apparently berating her for wasting her time. Peacocks often appear in images of lonely women because their cry sounds like that of a woman in pain."

The concept of these questions is to determine whether more information makes people like the paintings better.  My own experience would suggest that it does.  Like many visitors to the site, I know very little about Indian art and when you don't know what you're looking at, it's hard to be totally engrossed, even when some of the characters have blue skin or cobra heads or are riding on elephants. 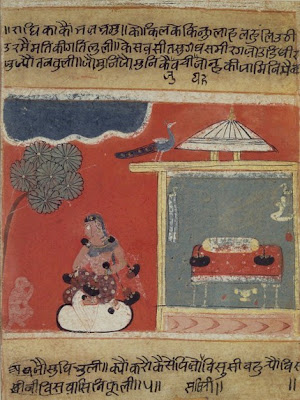 (A hint as to what this guy is up to might have led me to choose it as more intriguing than its partner.)

I confess that I'm intrigued by the concept of crowd curation more than by most of the paintings that I looked at.  And by the decision of the real curators to put so much faith in first impressions.  We've all been taught to not make snap decisions about what art we like, but to inspect and think before we form our critical opinions.  I could probably write a lot more about that subject but for now, it was kind of fun to  pass instant, unthinking judgment.

Give it a try -- they're looking for more volunteers!

Posted by Kathleen Loomis at 11:18 PM