A week or so ago I took a workshop from Jane Dunnewold on screen printing, which taught me just enough to be dangerous.  I am wary of learning new techniques in one's later years (artistic years, not necessarily calendar years).  Not that learning is bad, but once you have achieved sufficient mastery of some techniques, and are busy on a body of work that uses them well, you may be better off just staying in your studio and using the skills that you already have.

The alternative -- learning a new technique or buying a new piece of equipment -- can distract you, break your artistic focus, and set you off on a course where instead of making substantive work, you play with your new toy, trying to master the skill and meanwhile making lots of practice pieces that you can't yet be proud of (aka procrastination).  I've generally tried to resist this temptation, but the prospect of spending three days hanging out with Jane won out and I found myself in possession of two screens, a squeegee and a flour-paste resist recipe that allowed me to make great scratchy letters.

In the workshop I made a bunch of copies of the Battle Hymn of the Republic, simply because I have always loved the words to this majestic and thrilling poem, and I happen to know all three verses by heart, convenient when you want something to write and you're away from your reference materials.  But that got me thinking about the Civil War and prompted an idea and next thing you know, I was mixing up a new batch of flour paste at home to write the words to Dixie.

So back to the part about being dangerous.

I am itching to make something substantive.  Since I finished my three Quilt National entries in August, I haven't found anything to sink my teeth into.  I have made four decent pieces, but none sent me wildly off to do another in the series.  I toyed with several ideas but again, none generated enough enthusiasm to get me into the studio.

I loved the flour-paste writing, and the Civil War idea, and got up Friday morning knowing exactly what I wanted to make.  Only problem, I am really bad at screen printing, despite Jane's masterful teaching.  I can make a screen, pour out some paint and pull the squeegee across it, but haven't put in the hours to learn how to do this well.  My few prints look pretty bad, complete with smudges, smears, areas that have too much paint and areas that have too little or none at all. 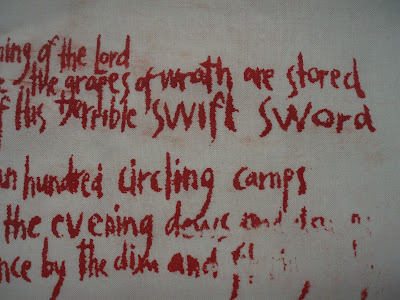 Then to top it off, when I went to wash out the prints I had made in the workshop, the paint smudged (we were working in tempera paint, not fabric paint, so we knew it wasn't going to be permanent, but many people got better results from their washouts than I did).  And when I made the new set of prints at home, I ended up with awful impressions (I think I inadvertently moved the screen between passes of the squeegee). 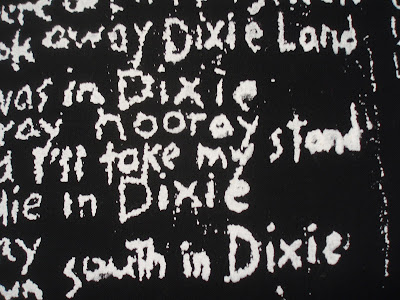 So what should I do?  Slit my wrists?  Hold that thought for three months while I embark on a crash effort to improve my printing technique?  Some people might take that approach, but I am hot to make a real quilt, good enough to show in public, and I want to make it NOW.

As I was ironing out my Battle Hymns and noticed how the paint had run in the wash, my first thought, being Grandma's good little perfectionist girl, was dismay.  But then I realized I kind of liked the messy, edgy, worn effect.  It went with the messy, edgy, worn quality of the writing itself, which was why I was so drawn to the flour-paste technique in the first place.  And after all, I want to portray the awful reality of war, not parade ground spit and polish.

Then I got to thinking about bad screen printing as a technique in itself, and how it worked so well for Andy Warhol.  It fit his message, too, conveying the raw, sloppy, crude quality of tabloid journalism, the perfect way to portray electric chairs and murder victims.

I decided to use the messy prints, just as they are.

So what does this mean to my screen printing career?  Will I ever use it again?  Will I ever put in the hours to learn to do it right?  Is it a good idea to use a new technique before you know what you're doing?  Will Jane disown me as a student?  Is Grandma turning over in her grave?  I don't know.

I do know a couple of things.  First, that I think bad technique is working for me, in this particular situation.  Second, that it's not at all distracting (aka procrastination) to learn a new technique if you bypass that nonproductive mastery stage and cut to the chase.  I'm sewing up a storm and feeling great about it.
Posted by Kathleen Loomis at 2:34 PM