I wrote last week about a huge fiber art piece by Alma Lesch that hung in the lobby of an office building -- until somebody decided to redecorate, and shipped it off to a museum.  My friend Rosemary Claus-Gray commented about another piece from that same era that also got redecorated out of existence, but wasn't so lucky to be sent to a museum.

The work was made by Marjorie Hoeltzel, one of the pioneering generation of fiber artists who worked in the 70s and 80s.  Marjorie is still active and making work -- I admired one of her necktie quiltsat a show in St. Louis a couple of years ago -- but it's hard to find good images of her things on the web.  Here's the only good one I could find.   She explained to me that most of her slides have never been digitized (yet another casualty of changing technology that is making a lot of artwork appear to be lost, even if it isn't).

For a while Marjorie made a series of huge works that consisted of fabric strips "sewed" through wire armatures like giant needlepoint.  They all started when she made a maquette that was shown at an art fair.  In itself it's a substantial piece of art, about 6 feet long by 2 1/2 feet tall. (detail below) 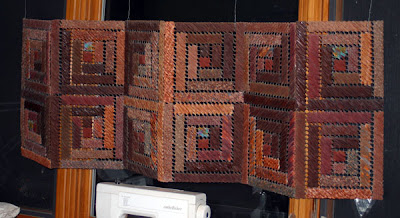 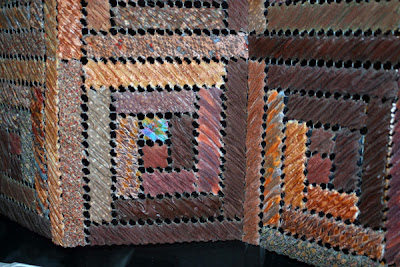 Marjorie recalls: "A local CEO of a large corporation with headquarters in downtown St. Louis saw the work and invited me to construct a piece of large dimensions for a long wall just outside his private office. The finished piece measured 5' x 20' consisting of five panels, each 36" wide and 60" high that, when finished, were bowed and secured to a frame, 5' high and 30" wide. Since this corporation represented several clothing manufacturers, they had boxes of samples of garments that had been slashed for shipping which I tore in strips (along with purchased commercial fabrics) and poked them through, the wire, using needlepoint technique combined with the 'courthouse steps' quilt geometry, each panel a different color.

"Several other commissions followed: one for an orthodontist reception area, three for prominent law firms, and few private homes. However, I missed sewing, and my hands were suffering, so I returned to the sewing machine, and have never regretted leaving this behind (except for the commercial remuneration aspect!)."

Today both the first piece of fiber art and the building in which it was housed have been destroyed.  But Rosemary had the good luck to trade art with Marjorie, and now owns the maquette that led to the series. That's Rosemary's sewing machine in the photo above; how wonderful it must be to have such a piece in front of you every day for insporation.  And how sad it is to realize that this small model, and some slides, are all that remain of a piece of work that must have been glorious in its day.
Posted by Kathleen Loomis at 11:35 PM