I've been reading one of those huge landmark books, "The Art Fabric: Mainstream," that are almost too big and heavy to hold, and that you generally find only in an art library.  It was written by Mildred Constantine and Jack Lenor Larsen in 1980 and is a survey of the first decades of fiber art.

I've written before about another book, "String Felt Thread: The Hierarchy of Art and Craft in American Art," by Elissa Auther, that says there were three separate bodies of work or approaches in the 60s and 70s that tried to bring fiber into the art mainstream.  Constantine and Larsen were the prime movers in the first approach, which was simply to curate a huge exhibit (Constantine worked at the Museum of Modern Art) and declare it to be in the mainstream.  Although this was comforting to the fiber faithful, it didn't really work with the Art World Gurus, but that's another subject.

The book I've been reading is one of Constantine and Larsen's subsequent efforts to legitimize fiber by proclamation (note the title).  I've found the book to be challenging, exciting, thought-provoking, slightly disappointing, and dated.  I'll probably write several posts about it but my thought today was sparked by the realization of how much fiber art, in those exciting days of the 70s, was tied to architecture.

Photo after photo in the C/L book shows huge fiber installations in the vast atriums and open spaces of office buildings, hotels, shopping malls, churches and subway stations.  Many of the big names in fiber art -- Sheila Hicks, Helena Hernmarck, Gerhardt Knodel -- seem to have supported themselves largely through such commissions.  On a less grand scale, any of us who were out and about during the 70s and 80s will remember a lot of quilts and weavings hanging in banks, hospitals, office lobbies, places where a huge expanse of stone or concrete needed something to warm it up.

That's good, of course, because it's nice to see artists getting big bucks for big works, and it's nice to have art in public places where lots of people can see it.  But it seems that in a way, such practices somewhat trivialized the art, turning it into decor that could (and should?) be replaced whenever the rugs and sofas got worn.

In 1982 my company moved into a fancy new downtown office building, and as the name tenant, we got to choose (and buy) the art for the lobby.  I wasn't a big fiber art aficionada at that time, but I was pleasantly surprised that the art consultants steered my boss to commissioning a huge quilt/hanging from Alma Lesch, the grand old lady of fiber art in Kentucky.  The piece was 12 feet x 14 feet and weighed 94 pounds!  It consisted of hundreds of individually faced and free-hanging "petals" that were sewed to a backing to make a landscape. 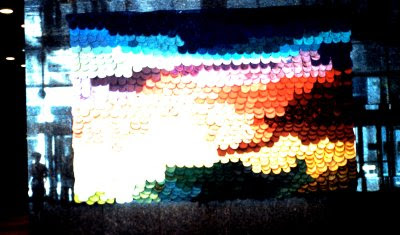 Alma Lesch, Lay of the Land, 1983; details below (some in progress with safety pins) 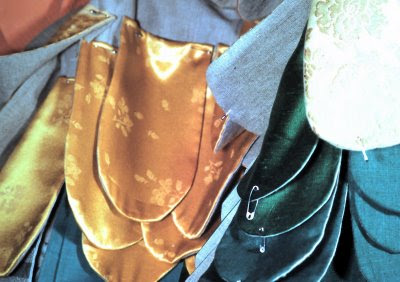 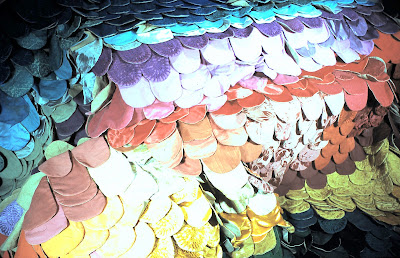 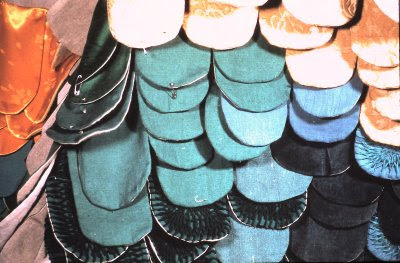 The hanging gave lots of life to the lobby, but ten years later somebody decided it was time for redecorating.  They gave the hanging to the Museum of  Fine Art in Owensboro KY, Alma's home town, replaced the shiny granite wall (you can see it reflecting the windows behind in the full view photo above) with wood, and bought some truly awful big ceramic vases to put into niches in the new wood.  Yuk.  Sorry to say, the vases have survived 18 years so far and counting.

I wonder if they would have been so quick to trash the art had it been a painting or sculpture (or an expensive vase).  Maybe so -- art history is littered with sad stories of public installations that were destroyed, put out to pasture or plastered over -- but perhaps there's something reminiscent of home dec in fiber art that makes it particularly easy to take it down and start over.

Posted by Kathleen Loomis at 1:38 PM