Another quilt finally has its day

I wrote last week about a quilt that I made three years ago that had never been in a show, until now.  In the same show, another quilt, almost the same age, will also have its debut in public, at the Claypool-Young Gallery in Morehead KY, June 4 - July 29.

This one is made with my "postage stamp" technique of little rectangles of fabric held together in the air with lines of stitching.  As with its partner in delayed glory, this one sprang from an unexpected moment when I came into the studio and saw work in progress casually piled on the worktable. But unlike its partner, this one's inspiration came from seeing another quilt in a pile.

I was working on a postage stamp quilt that contained more than 4,000 tiny American flags, and had been sewing and sewing and sewing and sewing for weeks, finally getting toward the end of the project.  The construction technique I use for these quilts leaves them in a huge heap as I work; the heap moves from one end of the worktable to the other as I sew, but never is neatly arrayed until it's finished and folded up into a bag.

The quilt in progress was meant to hang in a grid in space, and as I worked I would generally imagine it that way.  But this particular morning I noticed how delicious the little bits of fabric looked in their tangled heap, and resolved that my next postage stamp quilt would include a heap.  I made this quilt about a foot longer than it needed to be, and asked that it be hung so the bottom part would pile onto the floor.  Except for the day we photographed the quilt, I've never seen it installed and am looking forward to it.

For some reason I wanted to make a red quilt, and as I sewed I wondered what I would call it.  Even though I generally reference disasters and unpleasant occurrences in my quilts, I didn't want to do so with this one.  I'd just put in a highly emotional month sewing the American flags, which commemorate the U.S. military dead in Iraq, and was ready for something cheerful. 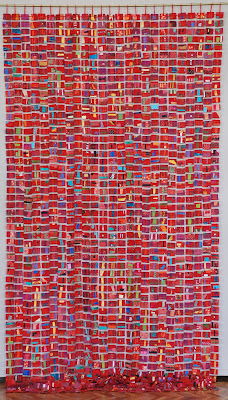 Postage 4: Spaghetti Sauce  (detail at the top of the page, in the right-hand column)

I decided that this quilt, with its lush reds cascading into a pool on the floor, is about spaghetti sauce, which happens to be my favorite thing to cook. Here's the artist statement:


I should have been Italian, because I could happily cook and eat pasta at least six nights a week.  As I made this piece, with its red sauce pouring down onto the floor (um, plate), I thought about spaghetti sauce as a metaphor for life.  Every night you have to fix dinner.  Maybe you went to the store and bought ingredients according to a plan; maybe you root around in the fridge to find leftovers or hit the cupboard for a can or two.  The sauce rarely ends up exactly like it did in the past, and some nights are better than others, but it’s usually better than 99% of the world’s supper.

Posted by Kathleen Loomis at 9:38 PM