I've written a couple of times about my "daily art" project for this year -- actually it's weekly rather than daily.  I am making bundles and packages out of stuff that's lying around.

Recently I had the pleasure of spending a week at the beach with a five-year-old.  As you know, one of the best things about the beach is picking up stuff that's lying around.  Usually you carefully wash the stuff, bring it home, and do nothing with it.  But if your art project is to assemble stuff into bundles, then you are certainly supplied with plenty of raw materials at the beach.

After several days of collecting, I assembled my packages, and came up with six for the week.  That's a good week -- my project rules call for "at least one" but sometimes there's more stuff wanting to be packaged.  Some of my packages consisted of shells, of course, but others were made of plastic and string that had washed up on the beach or been discarded by visiting slobs. 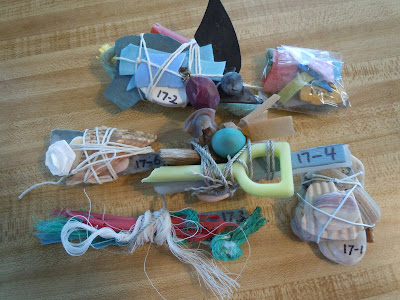 As I made my packages, we noticed that the five-year-old was watching carefully.  He was intrigued by the concept, and started making his own packages, wrapping a few shells in paper and taping them up with a roll of packing tape we'd acquired along the way.  Then he decided he needed to make packages where you could see the stuff, and needed more plastic.  After a special collecting expedition, he had enough stuff to make five bundles.

Here we are taping them together. 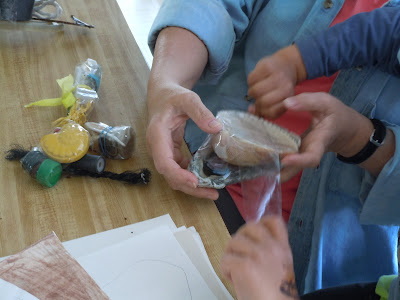 Finally, he numbered the packages.  (We both used a Sharpie pen that we found lying around in the rental house.) 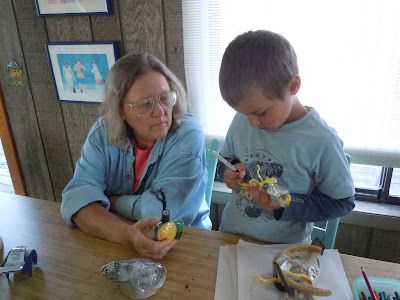 Here's our total art for the week. 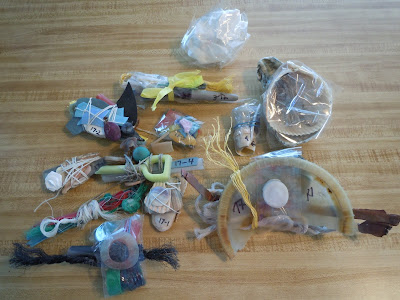 Posted by Kathleen Loomis at 11:19 AM