Jodi commented yesterday on the little bio that runs in the right-hand column of the blog.  "I see you have seven sewing machines   -- any of the them a featherweight, by any chance? Just wondering as I dopily passed up a good deal recently and am still kicking myself!"

No Jodi, there isn't a featherweight.  Even though featherweights may live in the hearts of sewists everywhere, like Santa Claus, none of them lives in my house.

I did learn to sew on a featherweight, but my mom traded it in on a fancier Singer when I was about ten, and that's the machine I used to upgrade from doll clothes to people clothes.  We were so proud of that Singer because it had an accessory that allowed you to do faux zigzag stitching for buttonholes.  The needle didn't move sideways, but this little accessory grabbed onto the fabric and moved it sideways, as well as forward and back, to make the buttonhole.  (Kind of like free-motion quilting, except you have to be the accessory.)

Trading it in -- that's the key word in my reminiscence.  In those days of course we traded in an old machine upon buying a new one.  Why on earth would you need two?  Why on earth would you want to keep that old outdated featherweight?  Sure enough, after I inherited mom's aforementioned Singer with the faux zigzag, I eventually traded it in on one with a real zigzag, and then traded that one in on my first Bernina.

But when it came time to upgrade to a new Bernina, the lady at the fabric store gave me the best advice I've ever received in terms of equipment.  When I inquired about a trade-in, she said don't do it!  You won't get that much money for it, and it's always better to have a spare machine on hand.  And boy, was she right!

When the machine has to go into the shop, you're not left unplugged for a week or two or three.  When you go to a workshop, just grab your other machine and go -- you don't have to undo your entire sewing setup (which in my case involves crawling under the table to untwist twist ties galore and unthread the cords from their serpentine paths).  When a friend comes over for a play day, she doesn't have to bring her own machine.  When your granddaughter learns to sew, set her up permanently with her very own machine so you can quilt side-by-side. 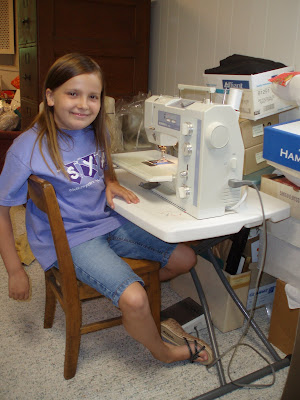 Zoe with HER machine

Here's my current roster of machines:
However, nothing from my mom.  Nothing from my grandmother, the greatest sewing wizard of our family (she had a treadle Singer, which my grandfather later electrified for her).  And no featherweight.
Posted by Kathleen Loomis at 7:08 AM