Every now and then you make a piece that you like a lot, but that somehow fails to impress the jurors who see it.  I've had three or four by that description lying around for a couple of years, dating from a period of immense productivity but relatively few show opportunities  These particular pieces weren't quite as good as their brothers of the same age, and whenever I'd send out three entries, the other ones would get in.

I understand why shows put age rules on their entries -- they want to make sure that viewers' first impressions aren't "my god, that old thing, I saw that at least once before."  And even if a piece hasn't been shown in public, there's a danger that older work isn't up to the best the artist can produce, or simply looks dated because newer work has taken on a subtly different character.  Nevertheless, there comes a time when a mother worries, like the mothers in Jane Austen, that her baby's expiration date has passed with nary a nibble from an eligible suitor.

So imagine my pleasure when not one but two aging virgins, both made in 2008, got to wiggle out from the bottom of the pile of quilts on the bed and go out in public!

The show is sponsored by the Surface Design Association in Kentucky, and will open June 4 at Claypool-Young Gallery at Morehead State University in Morehead KY.

One of the quilts in the show is pieced, in the skinny-line technique I've been using for several years now.  I was experimenting with the use of low-contrast colors for the "bricks" of my bricks-and-mortar patterning, and chose a blue, a green and a brown that seemed about the same value.  Maybe it was poor lighting, or maybe I was preoccupied, but I had pieced together a large expanse of fabric before I realized I was using woodland camouflage colors.  Rats.  I hadn't meant to use military references.  But I'd clearly gone too far to throw it out, or to introduce new colors.  I thought an expanse of plain black-and-beige would add some contrast and cut the military overtones.

My first thought was to place the black expanse underneath the camo expanse, but I came into the studio one evening and saw how the two pieces of fabric had been piled on top of one another   -- look, it's a flag!!! 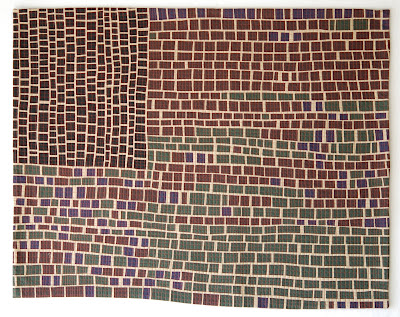 I'll tell you about the second quilt in a later post.
Posted by Kathleen Loomis at 6:08 AM