In the olden days of wind-up wristwatches, I used to jinx my timepieces.  Whatever the cause, every watch I ever wore ran slow.  Was it magnetism, personal or extraterrestrial?  (Perhaps I should have worn an aluminum foil hat.)  Or were my appliances simply reflecting my life?  (I generally ran slow, too.)

Fortunately they invented battery-powered watches and I've been on time ever since, or at least my watch has.  But I wonder whether my personal magnetism has transferred its mischief to my digital cameras.

My first Olympus lasted for three years, until it started to eat batteries.  It hit its death throes in the middle of a Nancy Crow workshop, when I realized it had taken all of three photos on a new set of batteries.  I went out to Best Buy that evening and bought a new Olympus, which was smaller, fancier, with a larger display screen, and cheaper than my old one -- technological progress at its best.

That one lasted four years, but started to get crabby, sometimes refusing to focus.  Last year I decided to upgrade to a third Olympus, which I loved for five days until it lost a vital part.  I took it back and switched to a Nikon, which I also loved, until one day the metal eyelids that protect the lens refused to retract.  Three weeks in the shop, and it came back, just in time for me to take it on vacation, and I was so happy.

Until I noticed that my photos had spots on them.. 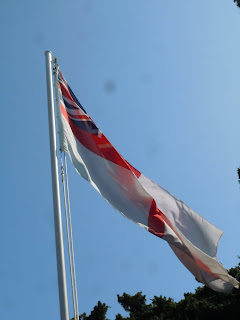 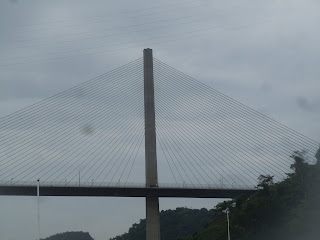 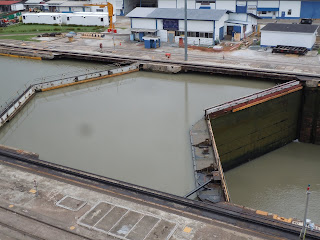 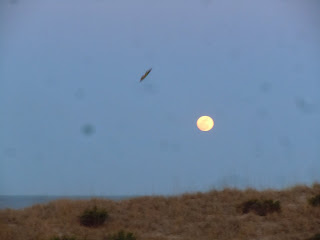 Well, you get the idea.  At first I thought the spots were crud on the outside of the lens, but they were uncleanable.  One of the professional photographers on my cruise thought they were specks of dust on the sensor, which would have to be fixed by taking the camera apart.

Eight thousand miles and three thousand photos later, I had gotten pretty good at framing my shots so that the largest spot would sit on top of something dark and busy rather than on top of empty sky.  It wasn't like dropping your camera overboard on the first day of the cruise, but it was a pain.

So back to the shop, the minute we got home from the far ends of the earth.  And Tuesday afternoon it came home again, just one week past its first birthday, with a new lens yet!  Had it gotten marred by the faulty eyelid, or maybe suffered collateral damage while the eyelid was being repaired?  Was there dust on the sensor?  Who knows.   Fortunately this camera has a two-year warranty.  How many more adventures will it have in its lifetime?  I hope not many.

PS -- my second Olympus, still crabby and sometimes reluctant to focus, has been a trooper, doing its best on days when the Nikon is in the shop.  Just as I think no serious sewist should have only one sewing machine, I think it's a really good idea to have a backup camera.
Posted by Kathleen Loomis at 6:26 AM