I learned to embroider from my grandmothers while still in single-digit age, and I suspect that most people who enjoy and practice fiber art learned hand stitching at some point along the way.  But like other basic skills picked up early on -- Spanish?  algebra? -- it's easily forgotten if you don't use it.

So last night I led a hand-stitching refresher course for the members of my local textile and fiber art group.  It's summer, we couldn't come up with another program, and an evening of stitch-and-bitch seemed like fun.  And it was.  We started with reminiscences, most of us recalling those napkins and hankies you would buy at the five-and-dime with motifs stamped on for you to embroider.  And all agreed that we didn't want to go back to that kind of stitching.  Instead we did freestyle.

A few people had brought hoops, but most of us just worked on the table -- much more conducive to freestyle stitching, in my opinion, because you can see your whole composition and can make long lines or skip around without having to reposition your hoop.  Besides, if you're not making precise little stitches, such as those where you had to perfectly match the stamped motif, you don't really need the control the hoop provides. 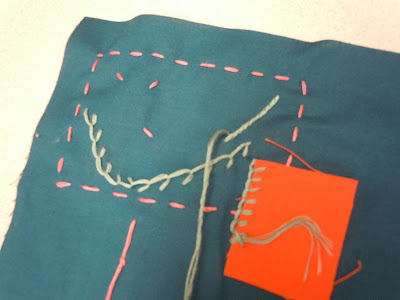 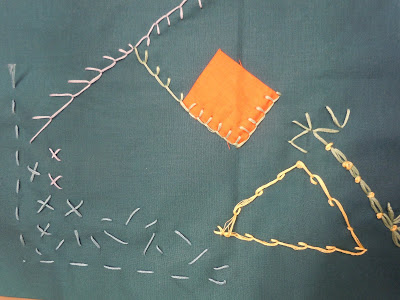 Then we did bent stitches, my term for those where the main stitch is pulled off straight and tacked down with another stitch.  We practiced making lines of feathers, pointing in both directions, and then varying the angle of the feather points.  When the angle is 90 degrees, you call it blanket stitch, and we used that to sew down appliques. 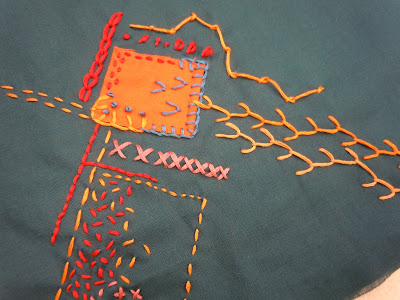 Then chain stitches, which are just like feather stitches except that you put the needle in much closer to where the stitch originated.  Both feather and chain stitches can be detached, which means you tack down the bend with a little stitch rather than with the beginning of the next stitch.  (When you detach the feather stitch, you call it fly stitch.) 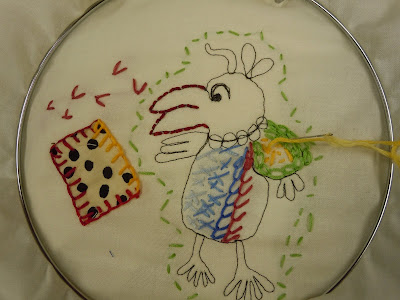 You probably know all these stitches, as did most of the people sewing last night, and just need a reminder.  But most of them were unfamiliar with the coral stitch, which is one of my favorites.  It makes a firm line with little knots, much better for stems and outlines than the stem stitch.  In case you don't know this stitch, here's a close-up: 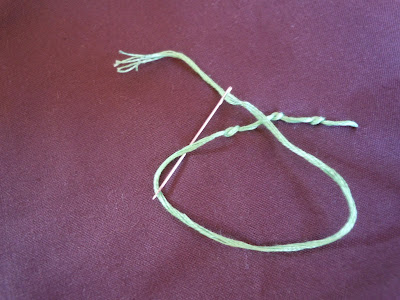 Work from right to left along an imaginary or drawn line.  Come up, lay the thread to the left along the line, and hold it down with your thumb (not shown in the photo, but pretend it's there at the left).  Loop the thread down and around, and take a tiny stitch underneath the laid-down thread.  Pull the thread through the loop to make a little knot, and you're set for the next stitch.

Posted by Kathleen Loomis at 11:33 AM