We were talking at my support/critique group the other day about revisiting old work.  Some in the room opined that they felt compelled to finish what they start within a relatively short period of time.  If they didn't, they lost the flow and could never return to that work.  So if they didn't know how to resolve a piece, they would have to do SOMETHING pretty quickly, even if they still weren't sure it was the right solution.

Others said they often put a piece aside if they didn't know how to proceed.  I am in that group, so I will be able to expound on this way of thinking more than I can about the other.  In fact, I have been in revisit mode for the last two months, ever since I took a whole box full of unfinished projects to a master class with the objective of finding out which ones were worth completing and if so, how.

The good news is that I found several projects to finish.  I'd like to show you one of them, because it taught me some lessons.  I started this project several years ago and did a good bit of piecing, ending up with two large pieces that were clearly supposed to fit together along the diagonal in the center.  I had stitched a black strip to one of the pieces, planning to sew it to the other piece.  Here are the two pieces on the wall in May, in their intended orientation.

You can see why I got this far and stuffed the damn thing in a box.  What to do with all those raggedy edges?  I had been trying to end up with a rectangle but had done a bad job of it, especially along the bottom.  I seem to recall that this made my head hurt and I gave up.

So on to the lessons.  The first is never to allow your piecing to be separated from the bits and pieces of matching fabric that you're working from.  Unfortunately I didn't put the rest of the pale pink into the box with the finished pieces, and a good hour of searching last month failed to turn it up.  So already I had painted myself into a corner.

Some of the lessons are more positive.  I realized that some of the factors that had made me despair of finishing Pinkie in the first place had gotten less worrisome during her years in the box.  Lesson: when you think something is awful, put it away and reconsider it later.  (It may still be awful, but often it's not.)

I had started with a big piece of fabric, hand-dyed in a pale pink that was not uniform.  It wasn't mottled, but it did change color from side to side, some places lighter than others.  When I started cutting into the fabric and sewing it back together with a black strip between the pieces, my thought was to keep all the pink pieces in their original orientation.  So if I cut a slice of pale pink off and sewed it back, it would still be next to the matching pale pink, and the finished quilt would have the same gradual, subtle changes in color as the original piece of fabric.  But as the piecing got more complicated, I managed to lose that thought.  Paler pieces ended up next to darker ones, and the color differences became much more prominent. Years ago, I was unhappy with the effect.  But when I looked at the piece again, I decided I liked it.

Another good lesson is to keep your teabags away from your fabric.  One day I had a cup of tea at the sewing machine and in some clumsy way managed to touch the teabag to the piecing.  Oops!  I decided I'd have to take out that part and repiece it with non-tea-dyed fabric.  But that never happened.  Upon revisiting, I decided the quilt had a distressed look to it and the tea stain fit in just fine. 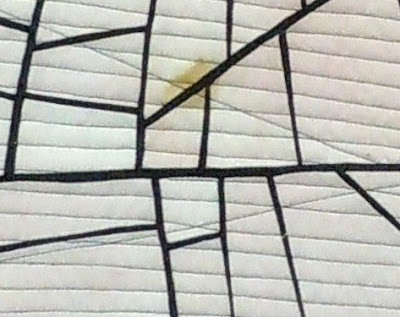 But how to finish this poor, distressed piece?  My search didn't turn up any more of the original pink, but I did find some other pink, a bit darker but equally distressed in character.  And I noticed that the beige fabric I'd been using for another quilt also seemed to fit with the original pink -- that's a hunk of it in the top photo, on the design wall to the right of the pieced areas.  I had to use the new stuff around the edges to make the quilt rectangular, so it ended up with a "border" on three sides.

In the course of finishing this quilt I realized how much I have learned about the niceties of fine-line piecing in the course of making 20-some quilts.  This very early effort deserved a D, and had I not loved the design so much I probably would have turned it into placemats. 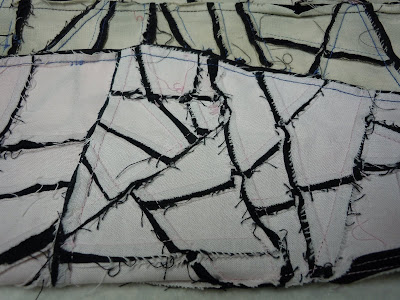 The back of the work was just too messy, with thread ends and fraying edges of the black fabric that would probably show through.  I spent a couple of hours with my tiny scissors trying to clean it up, but realized it would take all year to get it perfect.  So I decided to quilt in black and hope that the work would be hung in dim light so nobody would notice.

My final lesson came when I finished quilting and pinned the piece to my design wall to block it.  In my mind the quilt had always been a short, wide horizontal rectangle, but I had to turn it sideways to pin it to the wall.  And in the couple of days that it hung there in my peripheral view, I realized that it really wanted to be vertical!  It's often hard to change the way a piece sits in your head, especially if it's been sitting that way for years, but worth a try.

So here's the finished quilt, tea stain and all (I might put another stain or two on just to make it look deliberate instead of accidental).  Most of the things that bothered me the first time around don't bother me at all this time.