Modern quilting -- what is it?

I wrote last week about a new "blogzine," Generation Q Magazine, that is going to cover "modern quilting."  I'm intrigued by this concept, and wonder exactly what it is.  Last week we learned that in modern quilting there's "more going on than bold, graphic quilts with a lot of solids and wonky cuts."

This week we learn more.  "It’s about quilting that has a more contemporary aesthetic.... It’s for people who are interested in quilting that breaks the rules… we don’t want to be confined by tradition."

The article is framed as a phone conversation between the with-it 34-year-old heroine/writer and her painfully not-with-it mom, who keeps interrupting to wonder when daughter is going to get pregnant, worry that she's hanging out with lesbians and Democrats at the modern quilting guild, and report that at mom's good old-fashioned quilt guild, everybody has either a cane or a wheelchair. (I'm not making this up.)

Daughter eventually despairs at getting Mom to understand.   Finally she wails, "Look, I can’t explain to you what modern quilting is. But remember when you were in high school and the music you listened to started changing? And your parents didn’t understand it, because it wasn’t what they were used to, but you knew it wasn’t just different, it was yours? It was like it was meant for you. It fit you and your life and they way the world had changed since your parents were teenagers. And now you still love to rock out to Jerry Lee Lewis and Bill Haley, but you also love the crooners your parents listened to. You had your own thing, but it was based on what came before, and you embrace them both. It’s like that." 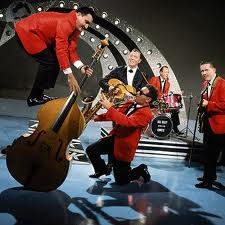 So if I can parse this explanation, I think that modern quilting is for young people who don't want to have much to do with old people and want to break the rules.  Plato and Socrates would recognize these yearnings, which were already kind of cliches three millenia back.

I'm not sure exactly which rules they want to break, or which traditions they find confining.  Still hoping to find out something a bit more specific, and still wondering whether by any chance anything about my own work and the work of other quilters I admire could be considered modern.  Since this is the internet and not a real quilt guild, the young folks wouldn't even have to find out that we're old.

In case you don't want to read the blog every day, I'll keep an eye on it and let you know what I discover.

Posted by Kathleen Loomis at 6:35 AM