I have been sewing nonstop since returning from my workshop and Quilt National opening weekend, the end of May.  Since then I have completed nine quilts (one of them from scratch, eight from my long-unfinished pile) and two tops (both from scratch).  And almost as time-consuming as piecing and quilting them, I sank all the thread ends and sewed on facings.

Monday I had everything photographed, a huge accomplishment because now I have lots of work to enter in shows if opportunities arise.  Tuesday I made the sleeves for all the new quilts and have started sewing them on.  It's time to start something new.

In the normal course of events I know what to do after I finish a project; I usually have a to-do list of work in process, or ideas that are waiting to be started.  And I do have several things on that list, but none that are shovel-ready.  I had two ideas that I thought would be very good, but after piecing those two tops earlier this month, I realized they weren't as great as I had anticipated.  The only idea that I am still really excited about is still not resolved in my head enough to start on.

It's too hot to be outside, which ups the crankiness quotient.  So when all else fails, clean the studio.  I'm not going nuts over this task, but I have been puttering around for the last couple of days, getting some things in order.  I found a bag with an old sheet, labeled "frayed on edge; use for quilt bags" and so I made three nice long bags, big enough to hold a 60-inch pool noodle with a big quilt or two rolled around it.

After finishing nine quilts in the last eight weeks, I had left a trail of skinny strips of fabric behind me, the edges that were trimmed off after quilting and before facing; I also came across a box of scraps that included lots more skinny strips.

So I braided them into lanyards, a perfectly mindless task that goes well with watching trash TV and jumping up during the commercials to do the laundry.  Excellent for antsy folks with short attention spans and a reluctance to throw things away that might conceivably become useful.  So now I have a dozen or so sturdy cords that will be great for tying up the rolls of quilts that will fit into my new bags. 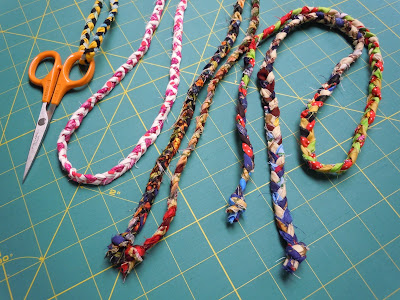 This is really pathetic, isn't it?  I sure hope I figure out what to do next and get back to working on grown-up projects.  Also it would be nice if the temperature got below 90.  No hopes for either one in the immediate future, I'm afraid.
Posted by Kathleen Loomis at 6:10 AM