I had to laugh at some of the comments left by readers of my post yesterday, assuming that my studio is now neat and organized, just because I said I'd spent a couple of days puttering around.  First, I spent most of the time braiding cords, not actually cleaning.  But more important, the messiness of my studio is legendary, and it would take a couple of hundred days of puttering around to actually achieve organization.  That will not happen in my lifetime.

I clean on a need-to-know basis.  If I need the whole work table or design wall panel to assemble a very large quilt, I'll clear it off.  I do a great deal of cleaning and organizing in the course of searching for something I need, but when I find it, I go back to work.

Fortunately I must have the kind of brain that thrives on chaos.  I think some of this is genetic, but it was certainly exacerbated by my first career, as a newspaper journalist, in which you had to do your work in a large room full of ringing telephones, people wandering in and out, a dozen conversations going on within earshot.  I learned quickly to tune out distractions and focus on my work. 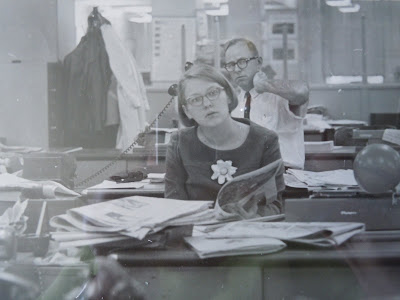 My first (messy) desk at my first real job.  The typewriter was manual; the balloon and the vacant look were temporary.  PS -- some years later I married the cute guy sitting behind me.

I've always thought that an empty desk was the sign of an empty mind, and eked out a successful career from piles of papers stacked on the desk, the bookcases and occasionally the floor.  Not as bad as some offices I've seen, and probably my studio is not as bad as some others.  But certainly not ready for the magazine.

In a sense, that brain vibe is probably related to much of my work.  Although I admire spare, minimalist compositions by other people, my own work tends more toward the termite end of the spectrum.  (Termite art = that which is composed of a bazillion tiny bits, put together in an obsessive manner.)

I would love to have a beautifully organized, clean studio with everything in its place and all horizontal surfaces empty, ready for making art.  I'm just not willing to spend the time to get mine that way (and unless my studio were to miraculously triple in size, or I were to throw out much of my stuff, it's physically impossible).  So I've decided to grin and bear it.  And just writing this has made me feel a lot more energetic than I was earlier in the week.  Time to go downstairs and see if I can make some art instead of just braiding cords.