The bottom line on modern quilting

Ever notice that occasionally you manage to one-up your kids on some aspect of trendy hipness?  Once in the last decade, for instance, we saw a new movie before our son the movie nut did.  Just last week we went to a hot new restaurant within days of its opening.  And now and then we utter a word or phrase that old people aren't supposed to know, and we even use it correctly in the sentence.  First the young people are surprised, and then they're impressed.  You can almost see the wheels turning in their heads as our reputations creak up a notch or two.  Heck, it's more fun than taking everybody out for dinner!

I've recently been made aware of a new thing called "modern quilting," and in the interest of perhaps surprising and impressing a young person at some future date by using the term correctly in a sentence, I'm trying to understand exactly what it is.  So I seized upon a recent post in Generation Q Magazine for more clues.  This post was a profile of Julie Herman, a young woman with a quilt business, selling patterns and stuff.  Her blog is engaging and her quilts are cheerful.

But we're looking for meaning, so here's the applicable part of the post:

"What modern means to Julie:  For me modern quilting is learning as many ways to do what’s possible and then choosing what’s best for you. Don’t make something because someone told you to or it's popular. Make it because it’s something you love and it’s your happy medium.”

That didn't provide much definition, so I went to Julie's website to check out her quilts.  And was surprised.  Remember, we established from previous clues that modern quilters want to break the rules.  But Julie's quilts don't break any rules that I ever heard of; they're simple, geometric, block-to-block, most based on traditional patterns, all the pieces cut with rulers and perfectly matched at the points and corners.  As far as I can see, they're made with impeccable technique, perfectly flat and beautifully bound.  And you can buy the pattern and make one almost exactly like hers. 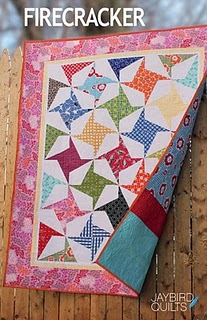 She has an excellent eye for color, and sometimes puts together unconventional combinations (orange, aqua and gray looked particularly nice) or uses black to offset brights and lights.

So what makes this modern quilting, other than the fact that Julie is 28?

After I wrote about modern quilting last week, one of my friends said in an email that she didn't understand what it is either.  "Didn't we already do this in the 60's & 70's??? ... There's a Modern Quilt Guild chapter in Portland (and there is one in Anchorage). From what I've seen in their blogs (show n tell), the quilts are pretty basic."

But as I think about it more, I realize that the modern quilting movement has much less to do with quilts than with quilting. In other words, the social aspect of the craft rather than the craft itself. This is not new, of course -- the quilting bee is one of the iconic images of early America -- but even at the quilting bee, don't you suppose the younger women liked to sneak off and talk about something different than their moms were gabbing about in the big room?

I'm delighted to see younger people enjoy the tradition and art form that I am so heavily invested in.  And much as we old people may think we're far wiser than young people, and have so much to teach them, I understand why it might be more fun for them to learn from one another, even if we might have a few more hard-won tricks of the trade to impart.

Much as we love having younger people show up at our guilds and give us a jolt of energy, I understand why they might be turned off by our company.  Way too much talk about health problems and visiting the grandchildren, not enough interest in the challenges of starting a career and looking for love (been there, done that).

My local fiber art group used to have a stitch-and-bitch in the mornings, and the most faithful participant was a twenty-something young woman who craved the companionship (she was self-employed and spent most of her time alone) and loved the craft.  Sometimes after the meeting broke up I would apologize to her, because the conversation had been so awful.  Now the same group has a young man on our board, and I apologize to him for the same reasons.  I know these younger people, especially the guys, must be rolling their eyes as much as threading their needles.

We like to think of ourselves as friendly and inclusive, but are we really?  I was chatting with a friend who attended a workshop at one of the big fiber art get-togethers earlier this summer.  She said it was populated by a core group of people who come every year, love seeing one another, and totally ignore everybody else on premises to the point of open rudeness.  And if a gray-haired woman feels this way, how do you think a twenty-something or a guy would take it?  No wonder they want a Movement of their own.
Posted by Kathleen Loomis at 6:32 AM