I’ve recently become aware of a movement whose name makes me gag – “craftivism.” Yet the underlying concept is worth exploring. It’s an umbrella term for many kinds of art and craft activities designed to promote good in the world. It’s as current as this week’s New York Times, as intellectually rigorous as my art history graduate seminar, as close to home as my fiber-art friends.

As I’ve read and heard about such activities from several different sources in the last couple of weeks, I think it’s time to think about what they are and how they fit into the art and craft scene.  These projects seem to fall into three major food groups.

First, charitable contributions or services, such as making scarves, toys, mittens, hats and afghans for soldiers, cancer patients, women’s shelters or the homeless; or teaching people to knit. This concept is as old as the hills (your great-grandmother might have knitted socks for soldiers in World War I; her grandmother might have done the same in the Civil War) but seems trendy with its new name.

Second, consciousness-raising display, making or doing something that will get people to think about political or social issues. In some cases, the audience is small and accidental; for instance, the Counterfeit Crochet Project encourages people to crochet and use "designer bags" as a commentary on brand identity and globalized marketing and manufacturing. 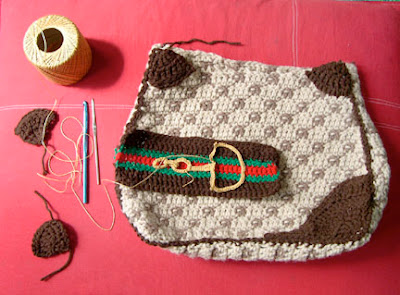 In other cases, the product is considered high art. For instance, textile artist Kelly Cobb enlisted an army of farmers and craftspeople to make a suit from products raised and produced within 100 miles of Philadelphia; it was exhibited at the Institute of Contemporary Art. Yarn-bombers covered a WW2 combat tank with pink squares to protest the war in Iraq; it was parked outside the Nikolaj Contemporary Art Center in Copenhagen.

Third, making things to sell.  This seems to break into two sub-groups.

One seeks to make existing products more ethically or cheaply.  For instance, Blackspot sneakers, made from hemp and recycled tires, are made in fair-trade factories and sold through independent retailers, sans marketing hype.  Ethical Metalsmiths make jewelry using only socially and environmentally acceptable materials (no conflict diamonds), and recycle the metals and gems from old jewelry.

The second uses craft to help disadvantaged people make a living.  Not a new concept -- perhaps you remember the Freedom Quilting Bee, founded in Alabama in 1966 as part of the civil rights movement; rural black women made products to sell and the next thing you knew, we had the Gee's Bend extravaganza!  Professional craftspeople are often enlisted to go to remote areas and help the locals improve their skills and design products that will be more appealing to potential buyers.  For instance, my friend Philis Alvic, a weaver, has worked with craftspeople in a dozen different countries from Nepal to Tanzania to Peru.

Some of these projects seem like no-brainers (ladies who quilt, sew and knit have been making and donating things forever).  Others seem kind of cerebral, a variety of conceptual art, and still others seem like great ideas for collective action but hard to incorporate into one's personal agenda.  I'll be thinking more about this subject -- and if you have thoughts, please share them!