I'm about to tell you several posts worth about my new volunteer project at the School of Art at the University of Louisville.  Today, the back story.

It starts with Judy Chicago's magnum opus, The Dinner Party, made in 1975-6, first exhibited in 1979 and now on permanent display at the Brooklyn Museum of Art.  Widely regarded as one of the high points in feminist art, it is a huge three-sided table with 39 place settings, each one commemorating a famous woman in history with an individualized plate and placemat.  An additional 999 women were memorialized on floormats on which the table rested. 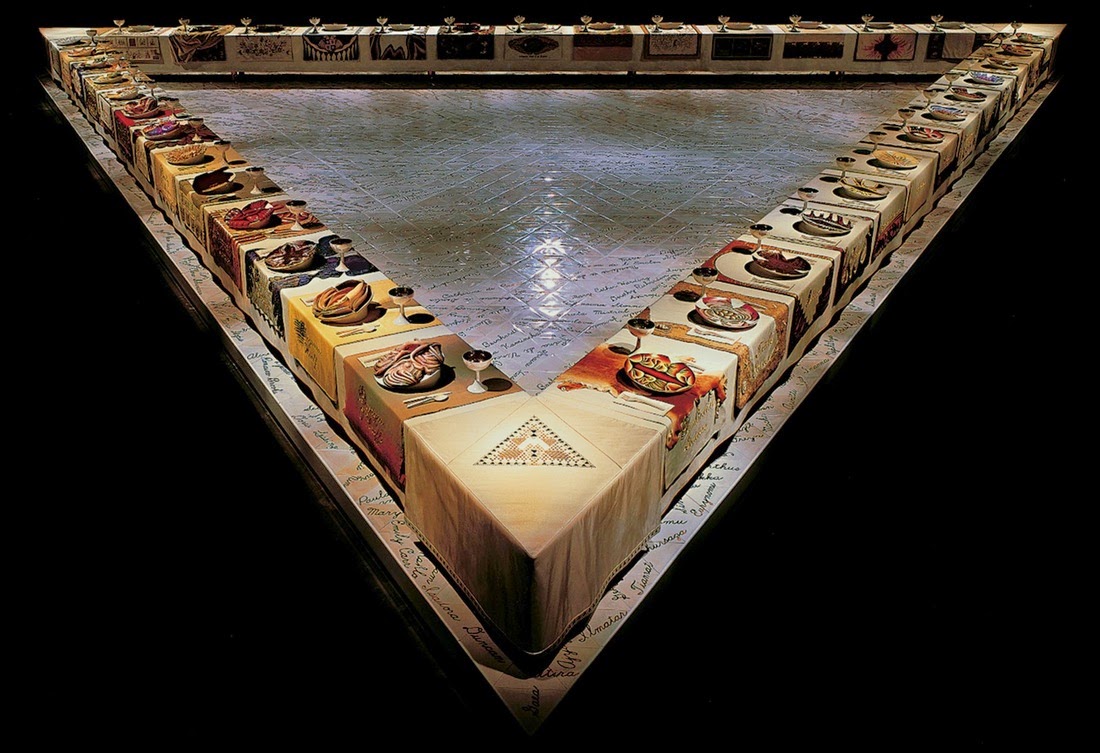 The exhibit toured the world for nine years, drawing huge crowds, and many of the women who saw it were moved to wish that their own favorite women could be included in the show.  At some point Chicago invited submissions from anybody who wanted to make a panel.  Hundreds of panels came in, and on later stops in the tour they were displayed as part of the Dinner Party installation.

The panels covered famous and not-famous women; many people honored their mothers, grandmothers, next-door neighbors and teachers.  Others chose women's organizations such as the League of Women Voters, the American Association of University Women or La Leche League.  Some depicted fictional, mythological or Biblical characters, groups such as farm women or pioneers, or universal themes such as menstruation.

There were only two rules: each panel should be an equilateral triangle, 24 inches on a side, and around the edges of the triangle should be written the name of the honoree and her city and country. Beyond that, the format, materials and techniques were up to the makers.

After the world tour, both The Dinner Party itself and the more than 600 volunteer-made panels went into storage.  Last year, Chicago's foundation donated the panels to the University of Louisville, and the school is now grappling with the task of properly documenting them.

In a moment of some kind of mental aberration, I decided that I needed to be involved with this project, so I'm spending several hours a week with the panels and a spreadsheet, helping the curators with the technical details of textile techniques and materials.  I'll tell you more about the project and my role in it in subsequent posts.


Posted by Kathleen Loomis at 6:13 AM