Getting ready to mail off some photos and I decided that it wasn't special enough to just send them off in the envelope from the photo store.  So I decided to make a little case from heavy watercolor paper. 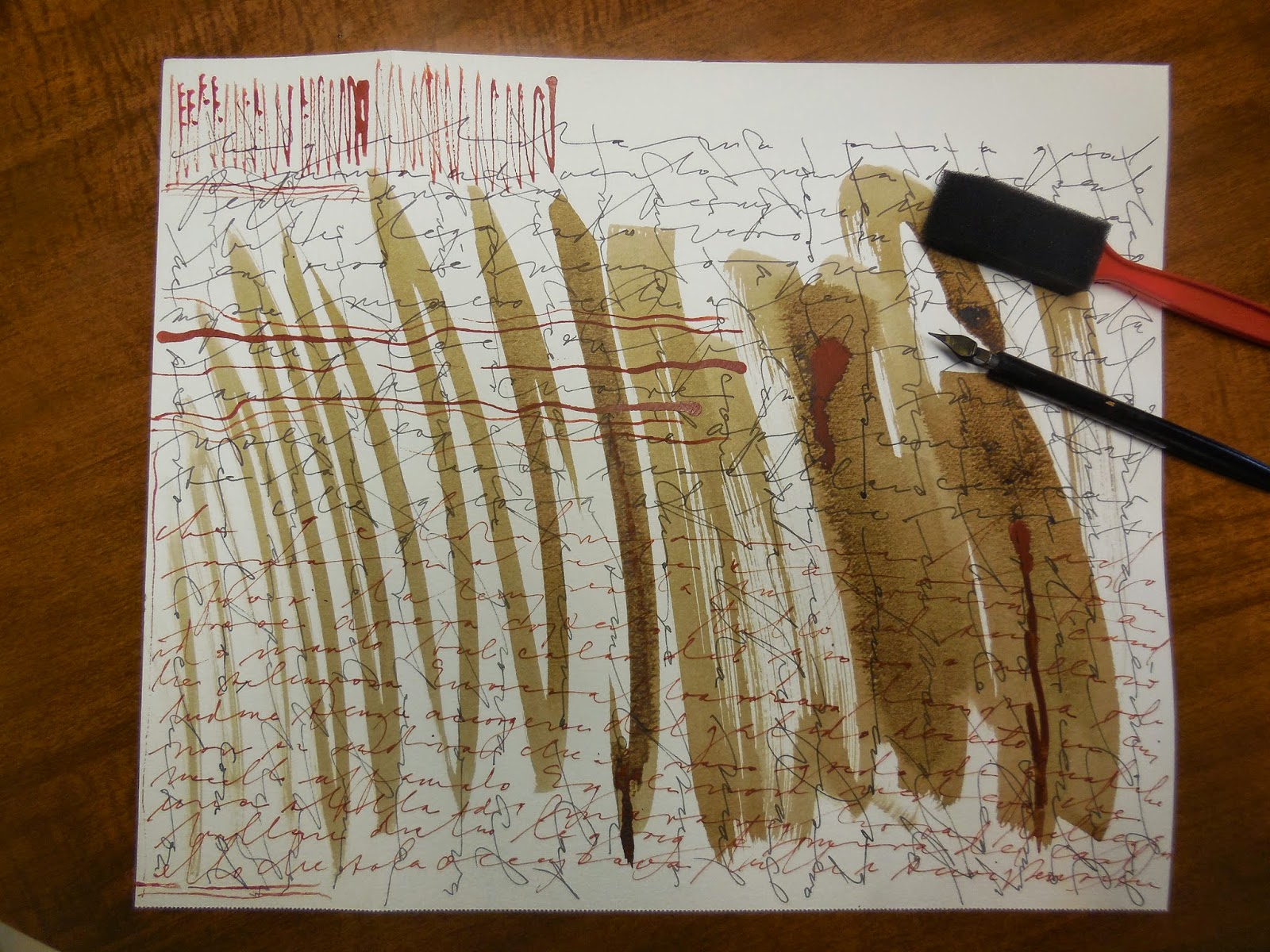 First I decorated the paper with a wash of walnut ink and then writing in red and gray inks.  On the reverse, a dark wash of gray ink, just on the portions that are going to be visible when the case is opened.

Then I laid out the pattern for the case, which needed to be a bit larger than 4 x 6 inches, to give a little room to easily put the photos in and out.  Here's the plan:  The back and front segments are the size you need for your case -- for mine, about 4 1/8" x 6 1/8".  The top flap is the same width but doesn't need to be as tall as the whole case; I cut mine about a half inch shorter.  The turn-in flap needs to be about two inches tall.  The side flaps need to be about two inches wide. 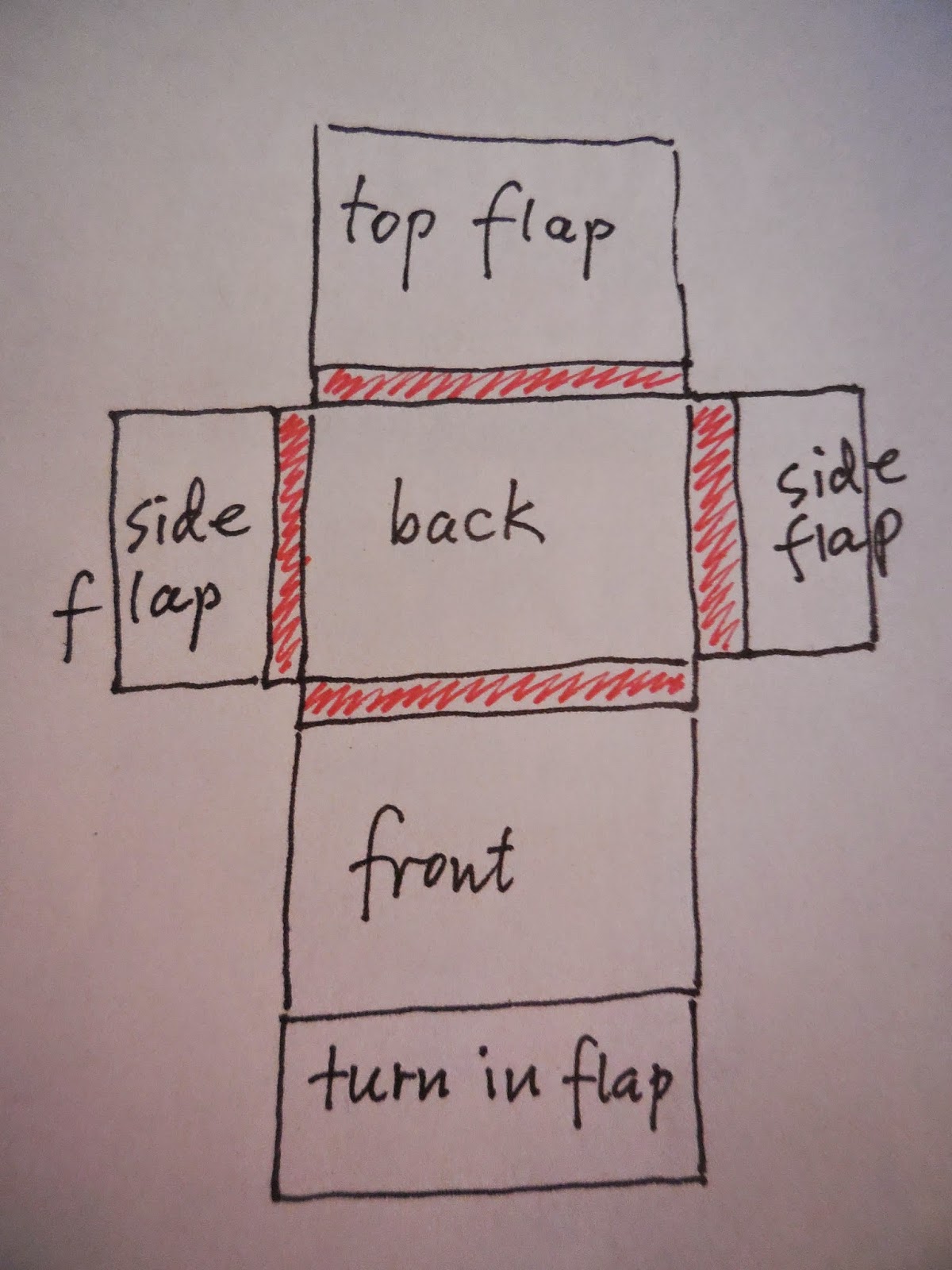 The four segments in red have to be the depth you need for your case.  I cut mine 1/4" wide because I had a relatively skinny stack of photos to put in the case.  Before I cut the pattern out, I scored the paper where the folds were going to fall, using the blunt edge of a knife, working on the back of the paper.  I didn't crease the folds flat or burnish with a bone folder, just turned them about 90 degrees up and gently finger-pressed the folds so they would stand at right angles. 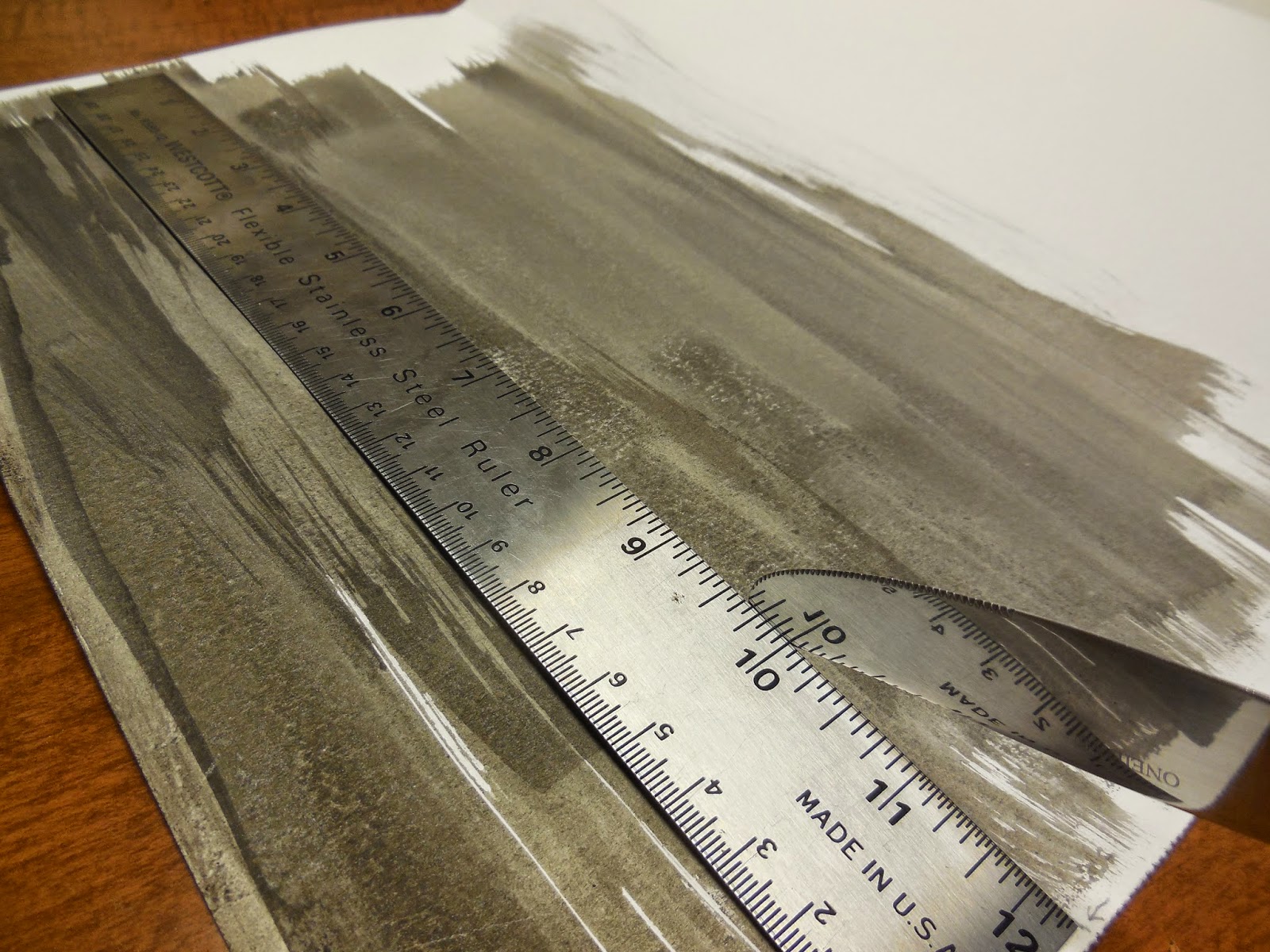 Now comes the hard part.  You need to insert the side flaps into the space between the "front" and the turn-in flap.  When I have made this kind of case in the past it was fatter, and the side flaps slipped into place with just a little urging.  But since this case was only a quarter-inch tall, there wasn't much give in the paper for the flaps to sneak in.  I ended up not only cutting a good inch off the side flaps -- they started out 3 inches wide -- but also cut triangles off the edges of the side flaps for more wiggle room. 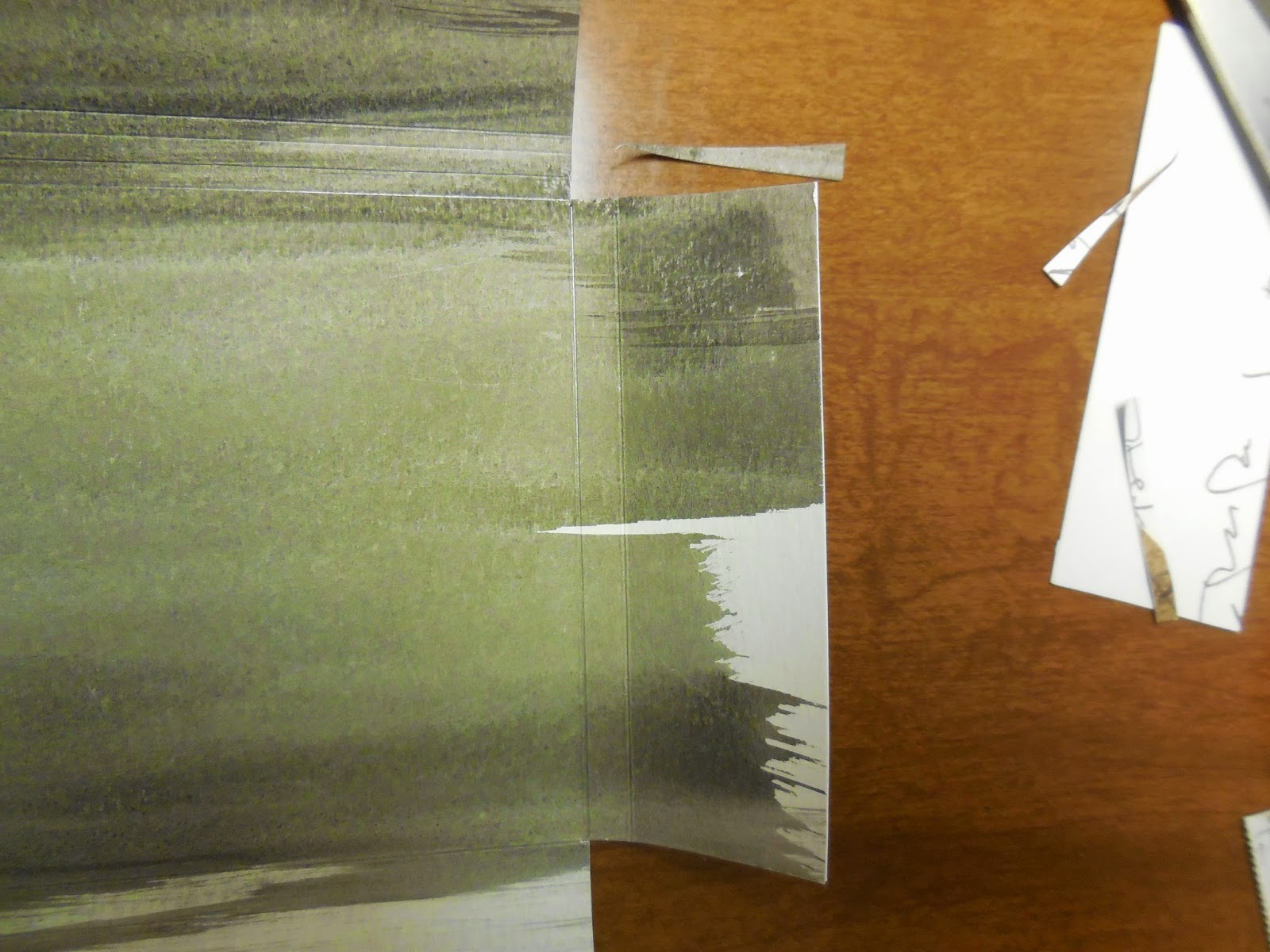 But after a good ten minutes of cussing, fussing, trimming and trying again, the flaps slid into place and the case looked beautiful. 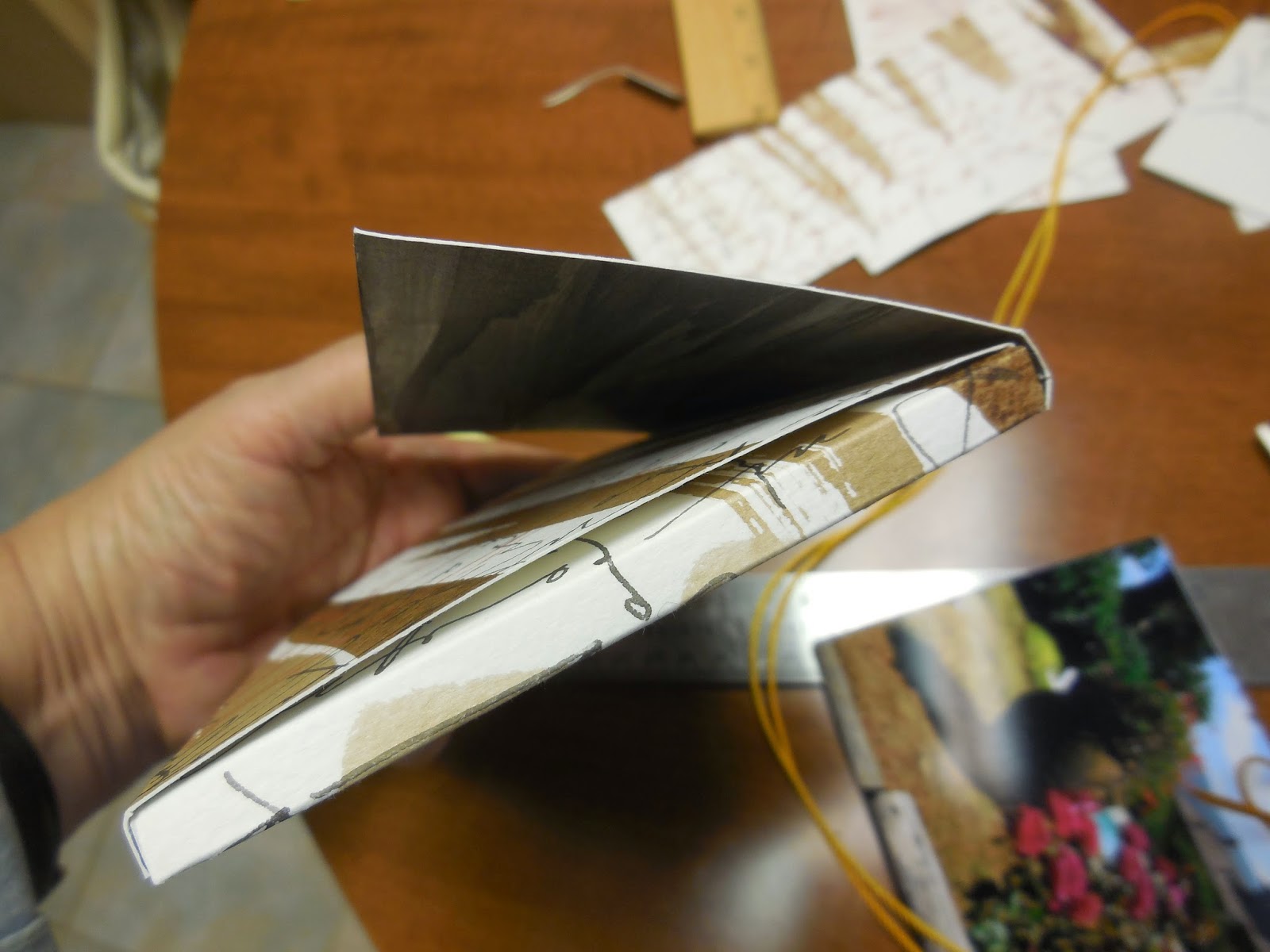 Do try this at home, with a couple of warnings.  First, make sure you choose paper with enough heft to make a rigid, sturdy case.  If you use lighter-weight stock your case will be more vulnerable to unwanted creasing and limpness.  Second, make sure you have measured accurately so the case doesn't fit too tightly around its contents.  When I learned to do this at a workshop, we actually didn't measure our pattern; instead, we just placed our contents in a pile on top of the paper and made each crease around the edge of the pile, eyeballing the ease that needed to be added in. 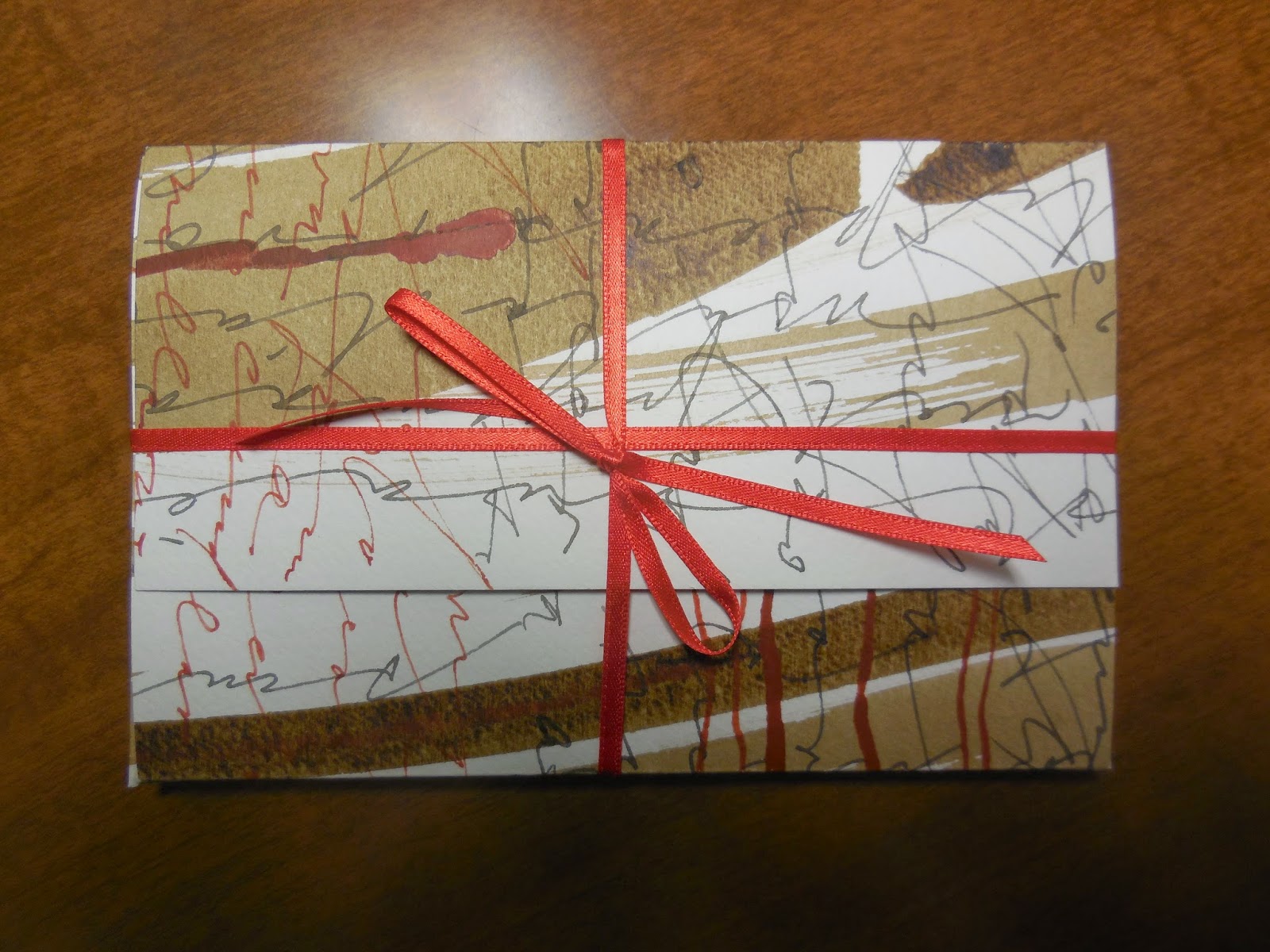 You still have three weeks till Christmas, time to make a whole bunch of these little cases to dress up your gifts

Posted by Kathleen Loomis at 8:58 AM