Quilting dilemmas -- pleats on the back


Got an email recently from Jaqui Brumm, whom I met at the Crow Barn in October.  She wrote:  "I like stitching a grid for my quilting but I get little pleats when my quilt lines cross each other.  Is there a solution to this?  Is it my technique or my equipment?  I have it happen so often that I just leave them in or I would never finish anything. Can you give me any advice on this?"

Jaqui, if it's any consolation, the same thing happens to me.  Here's the back of an otherwise impeccably quilted piece, with a little pucker.  Obviously I didn't think this was worth taking out and restitching, but it is a bit less than perfect. 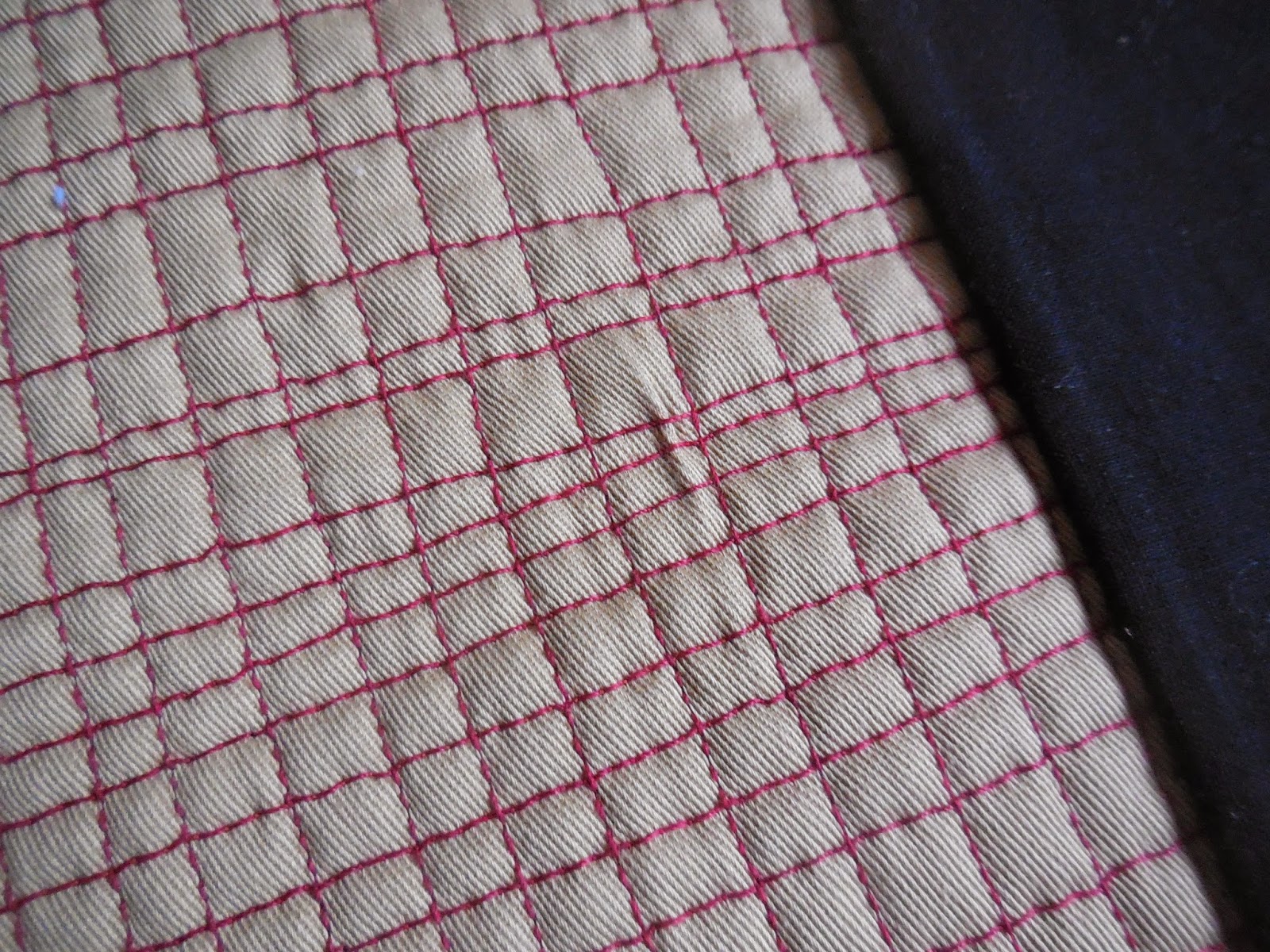 Let's analyze why pleats and puckers appear on the back of machine-quilted grids.  First you stitch parallel lines across your entire quilt in one direction, making a series of tunnels or tubes.  Because batting has a bit of loft to it (compressed at the seams, fluffy in between) the tubes tend to stand up rather than lie perfectly flat.  In effect, you have made a construction that resembles corrugated cardboard. Then you turn the quilt 90 degrees and stitch across.  As your new seams cross the old corrugations, they compress the tubes and stitch them together.

How might that bottom layer get to be wider?  At its simplest, imagine you're back on the first part of the grid, stitching parallel lines, each one to the right of the row before.  You tug and/or smooth the unquilted part of the top layer out to the right as you stitch, keeping it nice and taut. It looks great, but maybe when you were tugging and smoothing you tugged harder on the quilt top than you did on the batting and backing.  Oops!  That means you will inadvertently stitch a tube that's wider on the bottom than on the top.

In theory, that's why we baste or pin the layers together before we quilt, to keep the layers even.  But if your quilt is densely pieced, with lots and lots of seams, basting or pinning can actually be counterproductive.  That's because it's difficult, perhaps impossible, to press a large quilt top perfectly flat, with all the seams open to their maximum.  Yet as you quilt, tugging and smoothing to the right with every row of stitching, the seams open just a bit more; by the time you get to the edge of a large, densely pieced quilt, it may have stretched an extra half inch or more.  (That's also why you should leave a generous margin of backing fabric around the edges of your quilt top instead of cutting the two to match.)

To prevent pleats, there are several things I do in self-defense, most of them concentrating on that first pass of the grid.  If the first set of parallel stitches is done well, there shouldn't be many problems with the rows that cross it later.

I almost always use drapery-weight fabric for backings, not quilting cotton or muslin, and I never wash it first.  The stiffer the backing, the more likely it will be to stay flat and where you want it; limp is your enemy.

I don't baste or pin the whole quilt.  That leaves the layers loose and allows me to frequently adjust them.  I will pin a midline just to hold everything together as I put in my first row of quilting stitches, and I might put in one row of pins three or four inches to the right of my stitching, but mostly I rely on frequent tugging and smoothing on the unquilted portion of the sandwich to keep everything in place.

When I tug and smooth, I often tug separately on the backing in addition to smoothing the quilt top. Because I usually roll my quilts when working with a walking foot, it's hard to grab onto the backing separately; its end is usually buried inside the roll. So I frequently take the entire quilt to my work table, quilt top up, unroll it and press again.

I check the back of the quilt a lot, probably every third or fourth row of stitching, to make sure the backing is smooth and square.  I don't want it to be loose and puffy between lines of stitching, indicating that the bottom layers of the tubes are going to be too wide, and I also don't want it to shift off grain on the bias, which might make diagonal pleats or puckers.

Once the first half of the grid is sewed right, it's a lot easier to put in the crossing stitches.  I still check the back every now and then just to make sure no pleats are happening.  And if all else fails, console yourself that people generally don't see the back of your quilt anyway.


Posted by Kathleen Loomis at 5:56 AM