The 12th annual Form, Not Function: Quilt Art at the Carnegie show opened last week, and I've already told you about the best in show winner.  Today I'll write about the Award of Excellence in memory of Alma Lesch, the late pioneer fiber artist from Louisville, which went to Jeana Klein of Greensboro NC. 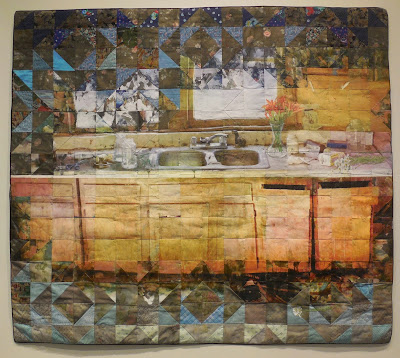 It started as a phototransfer, with the kitchen sink image divided into four-inch squares, sewed back together and interspersed with blocks of print fabric in a traditional quilt pattern.  Then she painted on top of the fabric to enhance and heighten some of the colors, and finally put on bits of hand stitching. 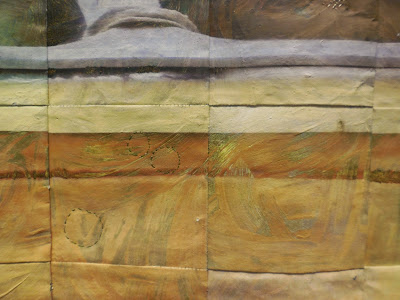 Many of us who attended the opening recalled that last year's show had a very similar quilt by Klein, with the same technique and the same kitchen sink imagery (but a different sink). 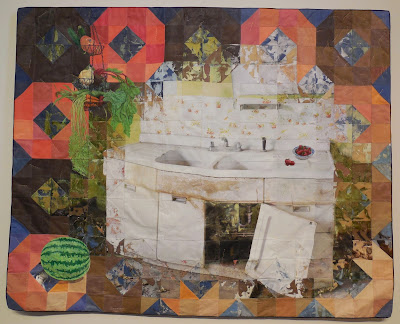 I liked this year's quilt better than last year's; having the warm colors in the main image, surrounded by the more subtle cools in the quilt blocks, did more for me than the reverse.  (Although I did love the watermelons from last year.)

In both quilts the overpainting was a noticeable and effective way of amping up the image a bit, giving an air of mystery to the photo and bridging the divide between image and background pattern.  And both quilts are examples of what I see as a welcome new approach to quilt art: mixed media as a way to move out of the strict quilt format and more toward the mainstream of contemporary art.


Posted by Kathleen Loomis at 5:28 AM