I'm working as a volunteer in "the Mending Project," an installation under the aegis of artist Lee Mingwei at the Kentucky Museum of Art + Craft in Louisville.  He will not be here during the exhibit, but came to town last week to set things up and hold a training session for the volunteers. 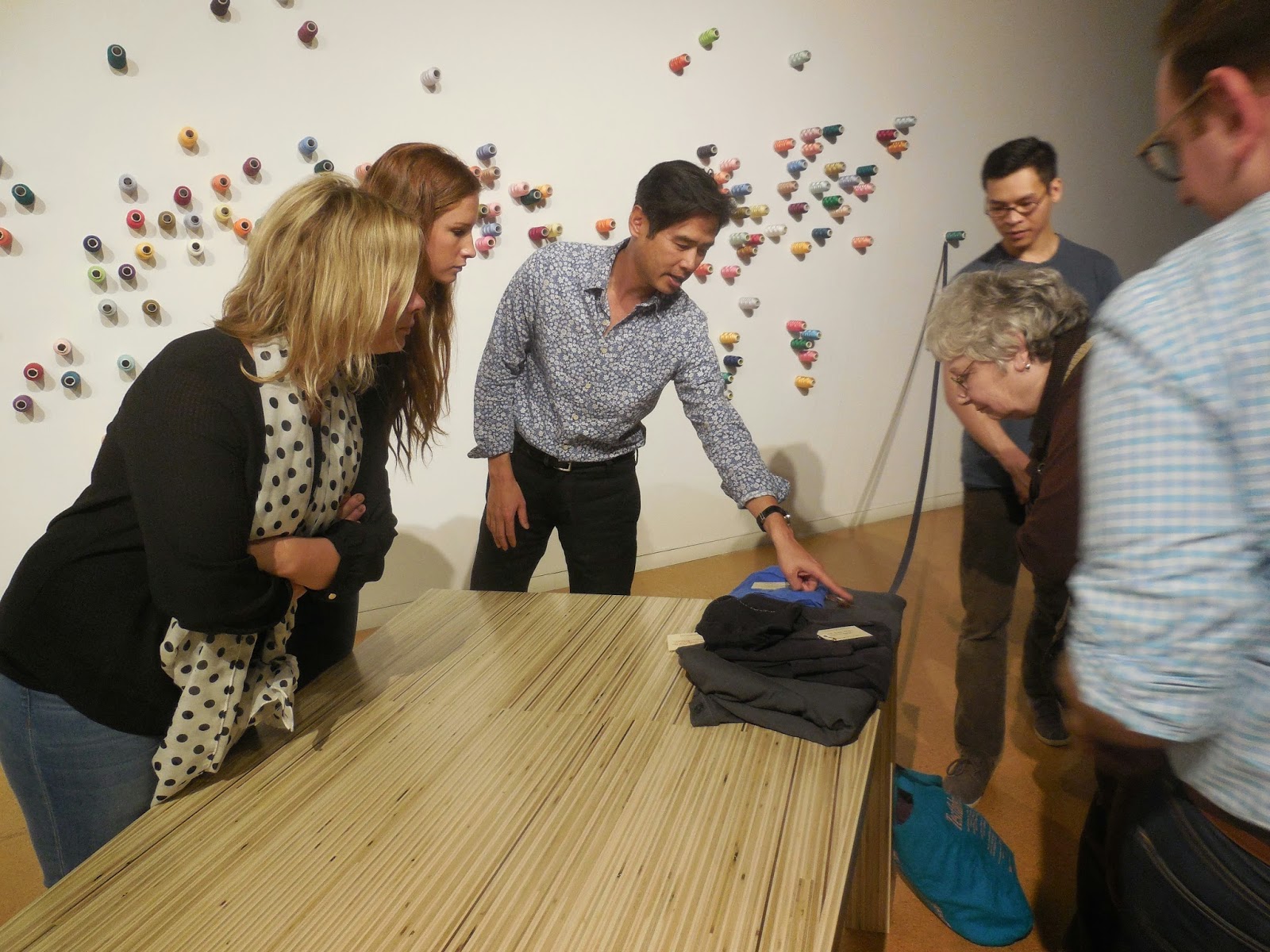 Here's Lee, surrounded by volunteers, pointing to one of the first garments to be mended.

Visitors walk in, sit down at the table and give you their garments to mend.  The first thing you do is ask the visitor to tell you about the garment.  Lee explained, "It's important for them to share the story of their garment; is there a personal history or memory behind it?"

When he conducted this project in other venues he heard many remarkable stories, such as a woman who brought a suit made by her grandmother, a concentration-camp survivor, and a soldier who brought the pair of camo fatigues that he was wearing when he was shot (complete with bloodstain).

He also had strange moments, as when a woman reached up under her blouse, unhooked her bra, wiggled out of it and handed it to him to be mended, since the underwire was coming loose.  (He couldn't figure out how to fix it.)  He told us that we're allowed to decline any garment that makes us feel uncomfortable, setting off a flood of silent speculation as to just what sort of garment that might be.

If a visitor asks, "Are you the artist?" Lee says to say yes, "if you feel comfortable saying that."

"When you're sitting in that chair it's your project," he said.  "I hope (the visitors) don't tell you what to do.  You're giving a gift to them; the receiver doesn't get to decide."

He compared his work to that of the performance artist Marina Abramovic, who famously sat silently in the Museum of Modern Art for 736 hours while one visitor at a time sat silently across the table and looked into her eyes.  "If it's Marina it has to be Marina sitting there," Lee said, "but if it's me it doesn't matter.  The most important thing is a stranger sitting there doing a generosity to another stranger."

Dozens and dozens of cones of shiny polyester machine embroidery thread are displayed on the walls of the gallery as a backdrop, and installing the thread was a serious production; "We were very intentional about making it look unintentional," said Marcus Siu, the art handler who got to do all the hard work. "It's a very Zen process," Lee agreed.

Because polyester machine embroidery thread is not the material of choice for garment repair, he suggested holding three or four threads together in the needle for greater strength.  Sometimes Lee simply puts a little doodad of thread onto a garment as a decoration.   He said it would be OK for us to bring some fabric to use for patches, or to bring beads for embellishment.

I asked him whether, since the mending was not really functional, he thought of it as decorative, metaphorical, or some of both.  He replied, "It's up to you. It's very much about the moment, when you encounter the person and the garment."

The visitors sit there while the garments are mended, but are asked to leave the mended garments on the table for the duration of the show, although it's OK to let them take the garment away in special cases, such as out-of-town tourists or those who might freeze to death without their newly mended coat.  (Fat chance of that happening in Louisville between April and September.)

Those were our marching orders; I'll let you know how things work out.  Stay tuned.