I did some volunteer work last week, proofreading the catalog for the Surface Design Association's big show at Arrowmont this fall.  Based on what I read -- I saw only the words, not the pictures -- it looks like a great show and I will make sure that I see it in person. 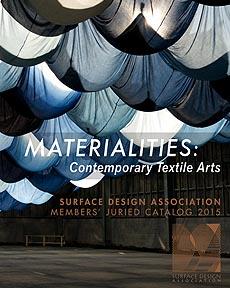 My marching orders as a proofreader were to be flexible; "We would like to keep this as close to each artist's voice as possible," I was told.  If people spelled it "colour" or used varying degrees of formality, that was OK.  But I did flag misspellings (Minnesotta, anyone?) and outright grammatical errors.

I wasn't expecting to find as many grammatical errors as I did.  But what really surprised me was that almost all the errors were the same thing: subjects and verbs did not agree.  Would you believe that eight of the 91 artists committed this mistake?

I'll take off my proofreader's hat and put on my writing teacher's hat.  The reason educated people writing about serious subjects commit subject/verb errors is usually because their sentences are way too long and are way too grammatically complex.  Educated people don't write "the interplay determine how the work will look in the end."  But they might very well write -- and in fact, somebody did --  "the interplay of disparate materials, of concept and making, and certainly emotion determine how the work will look in its ultimate incarnation."  There is so much padding in that sentence that by the time you get to the verb you've forgotten that the subject is "interplay," requiring a singular verb, not "materials, concept, making and emotion," which would require a plural verb were it the subject.

(And if you were to take another step back, what does that sentence mean?  The idea, the emotion, the materials and the technique all influence the art.  Well duh.)

I challenge you to look at your own artist statement.  Parse it for grammar.  Do not count on spell check to find your typos -- spell check is perfectly fine with a "limited addition" of prints, and can't tell the difference between "its" and it's."