My father would have turned 102 today so I thought it would be appropriate to celebrate by a moment of communion with one of his favorite works of art, which I have fortunately inherited. 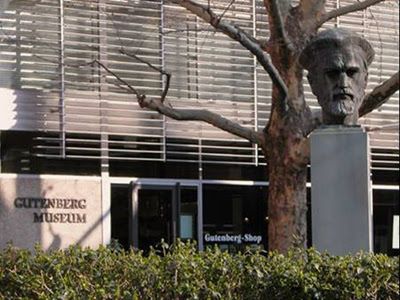 If you've ever visited the Gutenberg Museum in Mainz you probably saw this statue in the front yard. When we lived in Germany many years ago my dad, lover of printing and typography, had to visit the museum, of course.

Sometime later my dad got to visit another of his great idols, Hermann Zapf, the great type designer of the 20th century who just died earlier this month (you probably know Zapf Dingbats, as well as Palatino and Optima).  Zapf had a bust of Gutenberg in his home, and Dad admired it.  Yes, it was the same one from the museum, by Wäinö Aaltonen, a contemporary Finnish sculptor.  Zapf said he owned the rights to reproduce another bust, somewhat smaller than the original, and would Dad like to have one?  Is the Pope Catholic?

So Dad had this bust made by the same foundry, and it has always held the place of honor in the household.

Several years before my parents died, they held an infamous "art auction" among us three children, in which we got to divvy up all their pictures, sculptures and other precious items.  (Of course we couldn't take possession until much later.)  I am the oldest and thus got first pick, which of course was Gutenberg. 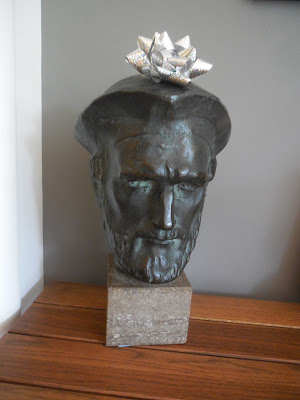 Posted by Kathleen Loomis at 9:02 AM