I've been writing about Quilt National for a couple of weeks now with words and pictures of the quilts that have impressed me.  Yesterday Sarah Ann Smith left a comment on one of the earlier posts that I thought deserved a reply that more people would read, so I'm doing this as a regular post instead of a comment.

She wrote:  "I am glad to see the photos you have posted here.  Honestly, QN has a reputation for a number of things (some great, some not so much), and it might do well to share more of the works online once it has debuted -- it would counter some of the misconceptions (including mine) and perhaps encourage those of us who only see the pictures of the winning quilts to enter.  A larger field of entries will only make for an even better exhibit.

"As for the catalog, is it now professionally photographed?  A few years ago the photos were deemed by many who were in the exhibit to be poor -- lighting/printing was way off in color and value; it may have been printing that was to blame -- but a shame that there was no opportunity to review the galleys and FIX the poor images.  Since most of the works I've seen haven't been my cup of tea, I haven't shelled out the $$ to order the catalog, especially if it isn't well printed.  It sounds like this year it is improved?  I sure hope so!" 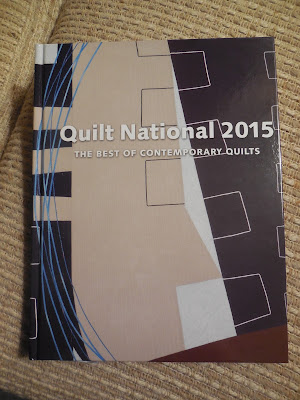 A lot of thought is provoked by this comment.  First off, I agree that simply looking at the photos of the winning quilts may give a skewed impression of the whole show.  Yes, there were only three representational quilts among the 14 winners, but even that doesn't indicate a juror bias, since two of the awards are given simply because the makers entered QN unsuccessfully for the greatest number of times before being accepted.  It might be nice if all the quilts were shown online, but that would certainly cannibalize sales of the catalog and you can understand why the Dairy Barn is hesitant to do that.

Yes, the catalog is professionally photographed -- and I believe it has been so for many, many years.  I was first accepted to the show in 2003 and we have always had to send in the quilts in October, within weeks of the acceptance letter, so they could be shot for the catalog.  I know that some quilts have had lousy images in past catalogs.  I've attended every QN for at least 20 years, and my typical routine was always to buy a catalog, then go around the gallery annotating it.  Many of my old books have marginal notes such as "photo is way too dark" or "not really pink, more red-orange."

I don't know why they weren't able to get better color fidelity in the past, but perhaps the fact that they shot the photos, then sent most of the quilts back to the makers for six months (there is no storage space at the Dairy Barn) made it impossible to compare proofs to the actual artwork.  (I know, you should shoot photos with a color standard card at the side...)  And the fact that all pre-press work is done on computer these days adds another dimension for potential error.

This year I didn't notice any photo in the catalog that seemed off.  In fact, the catalog has better views than you'll get in person at the Dairy Barn, thanks to the unfortunate new lighting system that focuses a small pool of very bright light at the center of each quilt, leaving the edges in shadow.  The photos I took and am posting are nothing to write home about, for that reason.  So I will particularly recommend that you buy a catalog.  The only thing I might quibble with is that this year's book has no detail shots, so you do miss out on some of the subtler aspects.

As you can tell by my past purchasing habits, I'm a huge believer in buying the QN catalog.  I think that any serious participant in or observer of the art quilt scene should keep up with what goes on in this important show, for the same reason that anybody in the movie biz needs to pay attention to the Academy Awards.  You may not like the particular winners from a given year, but you do need to be aware of what's going on in your chosen field.