I've written before about my volunteering in a performance art installation called The Mending Project, in which members of the public are supposed to bring in damaged garments or textiles to be mended.  The first three shifts I worked resulted in zero mending -- the museum hasn't figured out how to get the word out that people are supposed to bring in stuff.  It was getting frustrating.

On the third shift I finally got some action by convincing a guy visiting from Seattle to let me embroider a flower on his shorts.  I had him sit on the table to my left so I could hold the shorts in my left hand and sew with my right.  Being careful not to stroke his thigh in the process. 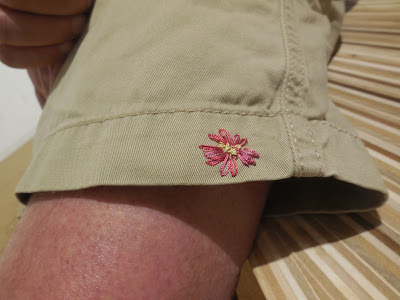 On the fourth shift, the following evening, it was the monthly gallery hop night and there were lots of visitors.  Two of them actually brought in some mending!!!!! but I also embroidered onto three dresses.  This one belonged to a seven-year-old, with whom I had a lovely conversation about school and art. 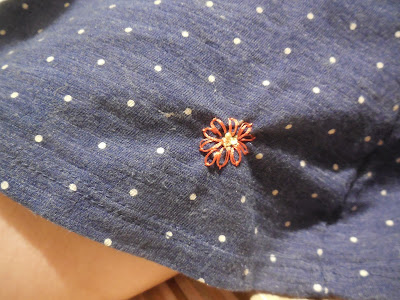 The next two belonged to college students who are in summer school; one was taking fiber art and we talked about the role of fiber art in the greater art world. 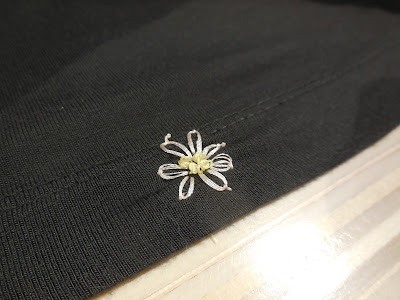 I had problems with this one -- the shiny, slippery machine embroidery thread is really not your first choice for hand embroidery.  Not your second, third, fourth or fifth either. 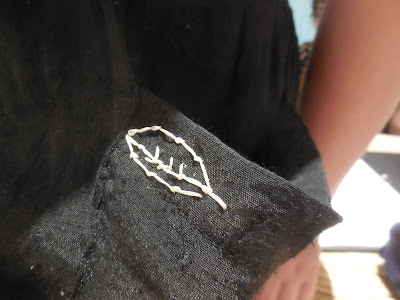