Workshop quilt -- by the teacher


When you teach a workshop you may have some free time, especially if you're spending several days with your students.  Sometimes you have a project of your own that you'd like to work on -- for instance, last fall when I taught at the Crow Barn I had to sew sleeves on the quilt that needed to be dropped off for Quilt National at the end of the week.  That was mindless enough that I could be attentive to what was going on in the room and yet not hover too much.

When I taught in Germany earlier this year I had no such chores to do, and after the first day people were settling in to sew without needing a lot of help.  So I had a brainstorm: I asked each student to give me some of her leftovers, and I started sewing them together into a little quilt.  Since we were studying fine line piecing, I used that technique too. 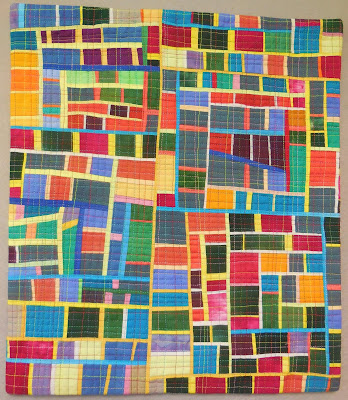 It was fun making the quilt, but not only did it keep me occupied, I think it was a good exercise for the students.  I had my pieces up on the design wall, just as they had theirs, and everybody could see how I decide what to sew to what, and how to resolve a bunch of modules into a finished layout.

They could also see me at work, notice how I deal with the details of cutting, piecing and pressing these tiny bits of fabric, and how I use my tools (tweezers, seam rippers) to make the process easier.  That's probably more instructive than simply walking around and suggesting to students how they should proceed; it's easier to watch somebody else do it first.

But the best part is that I have a souvenir of a great workshop.  I can look at it and recognize Hildegard's red and blue, Mieke's dark green and cerise, Monika's orange.  It brings back very good memories!