From "Patterns of Intention: On the Historical Explanation of Pictures" by Michael Baxandall:

'Influence' is a curse of art criticism primarily because of its wrong-headed grammatical prejudice about who is the agent and who is the patient: it seems to reverse the active/passive relation which the historical actor experiences and the inferential beholder will wish to take into account.  If one says that X influenced Y it does seem that one is saying that X did something to Y rather than that Y did something to X.  But in the consideration of good pictures and painters the second is always the more lively reality.  ....

If we think of Y rather than X as the agent, the vocabulary is much richer and more attractively diversified: draw on, resort to, avail oneself of, appripriate from, have recourse to, adapt, misunderstand, refer to, pick up, take on, engage with, react to, quote, differentiate oneself from, assimilate oneself to, align oneself with, copy, address, paraphrase, absorb, make a variation on, revive, continue, remodel, ape, emulate, travesty, parody, extract from, distort, attend to, resist, simplify, reconstitute, elaborate on, develop, face up to, master, subvert, perpetuate, reduce, promote, respond to, transform, tackle... everyone will be able to think of others.  Most of these relations just cannot be stated the other way round -- in terns of X acting on Y rather than Y acting on X.  To think in terms of influence blunts thought by impoverishing the means of differentiation.

Kathy talking now:  Artists often have mixed feelings when they admit to being influenced by some other artist.  On the one hand, if it's a famous, well-regarded artist, you're kind of proud to have studied with her or to recognize elements of her practice or attitude in your own work.  On the other hand, is there a more condescending, withering adjective that can be applied to artwork than "derivative"?

As a writer, I love the use of a grammatical argument to make what is actually a more profound point: that your relationship to other artists, both your contemporaries and those of the past, is controlled by YOU!  Yes, you can choose to make swoopy shapes like Matisse cutouts or to cut improvisational shapes like Nancy Crow, but it's still your decision and your hand that executes that decision.  And if Henri or Nancy lurks somewhere in the back of your consciousness as you work, it's YOU who shapes the thought process.

So if you have somebody in your consciousness, do yourself the honor of understanding that relationship.  Take the time to think about what you pick and choose from that person, and define it exactly.  If you know, for instance, that you love Nancy Crow's method of improvisation cutting, but you don't particularly like her way of composing the entire quilt on the design wall before you start to sew, then you have taken a big step toward understanding yourself. 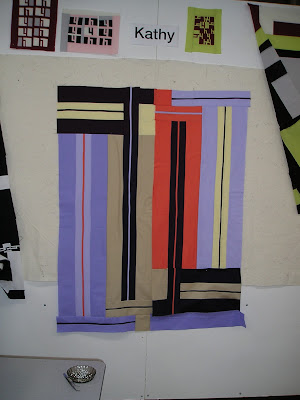 influenced by Nancy Crow: of course!

I believe it is always a good idea to articulate what's going on in your own head and your own life; if you can't say what it is, you can neither control your own behavior nor expect other people to appreciate your work.

I challenge you to think this week about the artists who lurk in your own consciousness, and define their place in your head and your work.  And then to contemplate what that greater understanding might mean to your art.