Everybody who's getting an ornament this year should have already opened it, so I should be safe in showing you what they look like.  After a couple of years of textiles I had the urge to do a new material this time and chose wood.  The construction process was a learning experience, some of which I will share with you.

Lesson 1:  if you're trying out a new material that might possibly break, bend, melt, split or otherwise lose its structural integrity while you work on it, buy some extras.  A lot of extras.

Lesson 2:  if you need to make 50 ornaments and they have only 42 blank whatevers in the store, do not buy them and figure you will come back later to get more.

After a lot of cussing and fussing I decided to call this the year of wabi sabi ornaments, referencing the grand Japanese tradition of mending, using and treasuring objects that are beat up and hard worn.  The plan was to emboss people's names onto the ornaments by whapping in my steel letter punches.  That worked great except for the ones that split (see Lesson 1).  At first I threw away the ones that split.  Later I decided I had to mend them and use them anyway, since I was unable to buy more blanks (see Lesson 2). 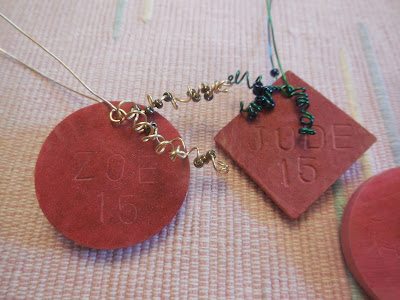 But let's don't focus on the difficulties.  After the punched letters turned out to be not as legible as I had planned, I decided to cover them up with jewelry.  The part with the beads and the wire curlicues was a lot easier and a lot more fun than the part with the wood, so I ended up my project happy.