Just got home yesterday afternoon from three days at my favorite retreat place and while I didn't accomplish as much as I had hoped, it was a very pleasant time with good friends.  As I did earlier this year, I left the sewing machine at home (just too big to shlep) and spent the time sorting and processing papers.

Here's what I brought with me: 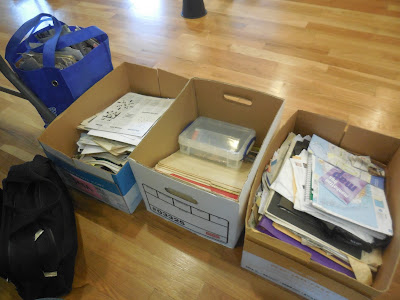 The cardboard box on the left contained bits and pieces, mostly that had been piling up on my desk for months.

Since I've been doing daily collage for almost three years now, I have amassed a lot of pictures clipped from newspapers and magazines and a great filing system.  Many of the file folders from this system were in the middle cardboard box.

But the clips have a way of not submitting to the system.

I'll take four faces from my "faces" folder to audition for a collage, choose and use one, and neglect to put the other three back in their folder.  I'll cut something from the paper at the dining room table, carry it to my desk, but never get around to putting it in the appropriate folder.  The piles on the desk were getting overwhelming so a couple of weeks ago, in anticipation of the retreat, I cleared the desk into the cardboard box.

I'm happy to report that I got through the entire box and got everything filed.  But should I have even bothered?  I'm giving up daily collage in three weeks -- maybe I should have just thrown it all away.  But that's not the way I operate.  At least now all the folders are in order, and neatly stowed in a box with a lid.  They can sit in the corner and be right there, perfectly organized, if and when I need them.

Fortunately that's not all I did in three whole days.  I actually made some art, in addition to clipping and filing.  I'll tell you more about that in a later post.